What’s Your Opinion Of This Option Trade?

In this option trading blog I have to make an assumption. Given the tone of your question, I believe you are long January 2007 options that expire in 2 weeks and not the January 2008 LEAPS. The stock is trading at $45 and you are long the $50 calls. These options are currently 10% away from the strike price and a move of that magnitude is highly unlikely. I can’t help you with the current position, but I can help you with future trades by pointing out a few warning signs in the stock.
.
. 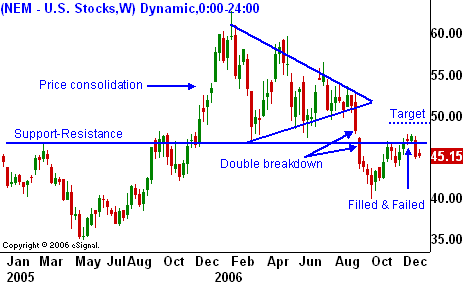 .
.
I often like to look at charts using different time perspectives. This helps me separate the trees from the forest. In this case, I found a weekly chart to be of use. First, you’ll note the large wedge in the middle of the screen that has formed after a period of price volatility. This is referred to as price consolidation. As the stock “coils”, the buyers and sells converge on an equilibrium point. Eventually. one side or the other will gain the upper hand. In this case, there was a greater supply of stock. Once the stock broke the wedge, it indicated that lower prices were likely.

You’ll also notice the horizontal blue line that divides the screen. This is a major support/resistance line. Once the stock broke below the wedge, it also broke below this support line and it was the second warning sign. You can also see the long red-bodied candles and the gap. These are also signs of weakness.

When the stock eventually bottomed, it rallied up to the blue line and briefly poked through it. It filled the gap and then failed soon after. Some traders might have tried a long once it filled the gap, but they would have immediately stopped themselves out once the blue line was breached.

My advice is to watch for these wedges and trade in the direction of the breakout. If you were long the calls early in the year, this was a sign to get out. If you purchased the call options in October, it was a nice call on your part, you just ran out of time and your target was a bit too aggressive. The good news is you probably didn’t pay much for options that were 20% out-of-the-money.

Legging Out Of Spreads

I Need to Know When I’m Assigned. Why Is Option Assignment Notification So Screwed Up?