How I Trade Options – A Seasonal Example!

Today John M. asks, “I am looking to play a seasonal trade on UPS. It usually runs up from mid-September to mid-December. Given that time frame what is the best option to choose?

What a great question! Remember, everything I do starts with the market and ends with the option. The market is about to make a 5-year high so the backdrop is very strong. Enough said, normally my market analysis would be more involved. Let’s take a look at the seasonality of the move. 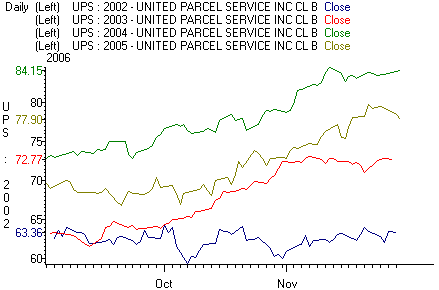 Looking at this year’s chart you can see that the stock was caught in a range before the big drop. That range created a horizontal support level at $78. Once the stock breached that level, it became resistance. Over the course of the last month, the stock has bounced and it has formed a nice short-term trend. It has also been testing a short-term horizontal resistance level at $72. This week, it broke through. 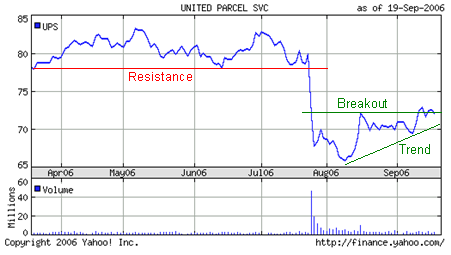 Looking back, the drop was caused by lower guidance. Earnings and revenues were up year-over-year but not as much as analysts expected. The company announced that 3rd quarter EPS would come in around $.87 and analysts were expecting a dime more. UPS has pricing power and they have raised rates this year. Furthermore, oil prices are dropping and the company should see some relief. The company is expanding domestically and internationally (with great prospects in China). The 1-Year forward P/E is a reasonable 17 according to Yahoo Finance.

Now we get to the fun part. We have a good looking candidate and we need to devise a game plan. I always dissect my opinion of the expected move:

Direction – Higher. The stock found support, has a small trend and a short-term breakout.
Duration – The seasonal move is expected to last six weeks.
Magnitude – The prior moves have averaged $10 and the stock should rally to $78 before finding resistance.
Confidence – High. The stock and the market have broken out and there is also a chance for a continued move to $82.

If we take a look at the options we can see that they are liquid and they have a reasonable implied volatility(IV). They trade at an IV of about 23 which has come down from the July spike. You can see this in the chart below, (courtesy of optionsXpress) when you compare the red and blue line. 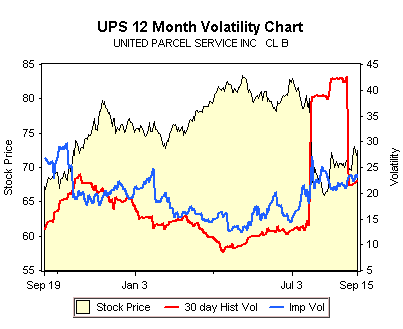 Since my confidence is high and I’m looking for a rather large move in the next six weeks, an in-the money call makes sense. The November 70 calls are trading $4.40 x $4.60 and the stock closed at $72.50. Essentially, I’m paying $2 over parity for the option. I’m choosing a November option because the “meat” of the move will be over at the beginning of the month and there is no reason for me to stay in the trade after that. If all goes well, the option will be in-the-money and trading with a little time premium. Hence, I won’t have to worry much about time decay. In all likelihood, I would be taking partial profits at the $78 level and holding the rest with a stop. That way if the stock goes to $82, I’ll participate, but I’m not sweating every tick since I’ve already locked in some profits at a reasonable level.

I’m not trading the November 75 calls because they are trading for $1.70. If the stock takes it’s time getting to $78, those options will only be $3 in-the-money and they may only be trading for slightly more than that. If you thought the move was going to materialize quickly and the $78 level would represent minor resistance, an argument could be made for trading the November 75 calls. Just remember, $78 and the first of November represent “trouble”. Also know that you have to navigate earnings on October 24th.
I’m not spreading the options because I don’t want to fight the extra bid/ask spreads and incur the extra commissions. If the stock moves, I want to be able to take profits and a spread will tempt me to overstay my welcome. I’m not trading December options because I don’t plan on being in the trade that long, I don’t want to pay the extra premium, and I don’t want to overstay my welcome.

That is my decision making process. I’m currently going through each step of it in My View so this was a timely question. Thank you John! You’ve provided us all with a possible opportunity and you’ve won yourself a free month of theOneOption service of your choice.

I’m Faced With An Ill Liquid Market? How Can I Keep The Market Maker Honest?

“I’m Reading A Course By Bernie Schaeffer. Is it a Waste of Time?”

Is there an options trading strategy that would produce an income of around 8% per year?

How Should I Approach High Implied Volatility Stock Options?

If The Stock Option Liquidity Is Poor, Can I Get Screwed Out Of Profits?