Yesterday, the market worked off early nervousness and rallied higher the entire day. After the close, Google announced weaker than expected earnings and it appeared that tech stocks would be down the next day.

When I turned on my screen this morning, I was surprised to see the opposite. Tech stocks were trading higher on news that Microsoft was taking over Yahoo. The S&P 500 futures were up 16 points.

An hour before the open the unemployment report was released. Analysts expected 85,000 new jobs and there was actually a decline of 17,000 jobs. Without the Microsoft/Yahoo announcement, it is likely that the market would have sold off.

I believe the Fed factored the weak unemployment report into its decision Wednesday. The market has taken the news very well. It now knows that the Fed is ready to take action as needed. This confidence has lent support to prices.

Next week will be pretty light as far as economic releases. That is a positive for the market. The earnings front will feature many cyclical stocks and very few financial stocks. That is also a positive.

If you look at the chart you can see that a support level has formed at SPY 134. That was below from last March and August. You can also see a capitulation low that was put in and tested. On a short-term basis, I am bullish. I believe the market could rally is high as SPY 144. On an intermediate term basis, there are still many issues that need to be resolved. Once the snap back rally loses its momentum, the bears will take another shot.

I still like getting long energy, metals, agriculture and some industrial stocks. I also feel that on a selective basis there are some values in tech. Get long and take profits. Also keep an eye on foreign markets. Asia did not rally on our coattails and that is a bit concerning. I want to see foreign markets establishing support. 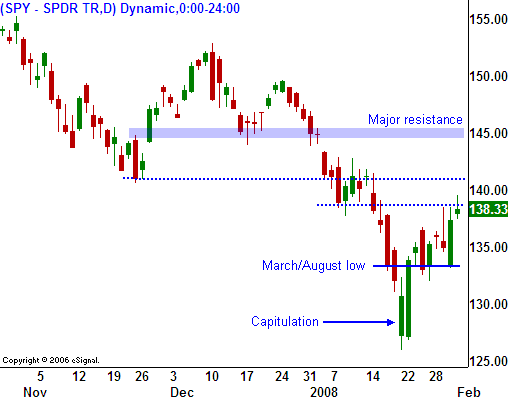