Yesterday, the market hit one of those nasty “air pockets” I’ve been warning you about. Weak guidance from AMD and UPS served as the catalysts. There weren’t any material news events to justify the selling. Once the decline started, the buyers stepped back.

This morning we’ve had a few good pieces of information. First, the initial jobless claims fell 53,000 to 357,000. Last week, initial claims were 407,000, the worst level since October 2005. A weak employment scene will weigh heavily on the market and last week’s Unemployment Report was discouraging. Fortunately, we did not see another jobless claims increase today.

Retail sales were dismal, but they came at slightly better than expected. Without question consumers are tightening their belts. The deep discounters like Wal-Mart fared the best.

England lowered its interest rates by a .25% and the ECB maintained its hawkish stance. These outcomes were highly anticipated.

Tech stocks got a little boost as the Yahoo/Microsoft fight attracted broader interest. It is rumored that Google might tender a bid and News Corp. might team up with Microsoft for this deal. Intel announced that it was selling its optical platform business and Intel connects cable business. The stock was also upgraded by Bank of America. Tech has been so battered, that I do feel there are some value plays in the sector.

The market doesn’t really have much news to sink its teeth into and it will chop back and forth while it by it’s time ahead of earnings next week.

Overseas markets were quiet and most of them were down slightly.

I still feel that this market is getting tired and staying liquid going into next week is the way to go. Dismal results from the banks and weak economic results could weigh heavily on the psyche of investors. Once we get past the first few weeks of earnings, things could start looking up.

I also believe that the double bottom will hold and that any pullback to SPY 130 will hold. I prefer to stay in cash and wait for a dip as opposed to trying to short this move and then pivot back to bullish positions. The market has been whipsawing over the last few months and I want to avoid the rollercoaster ride. 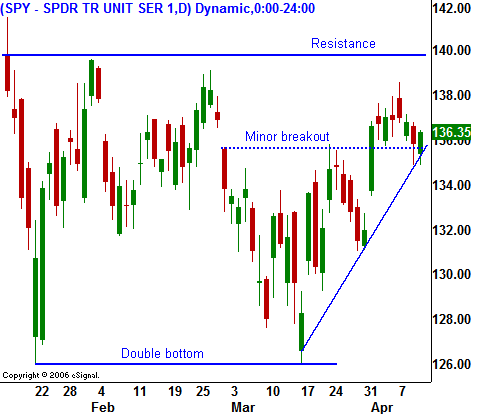