This morning, the market is pulling back after hitting SPY 138 resistance last week. Overseas markets are trading lower with Asia down 1% and Europe down half as much.

Financial concerns continue to plague the market. Major banks will dominate the earnings releases next week and they will be a focal point. Today, Citigroup announced it is close to generating $12 billion from the sale of troubled debt to private equity firms for an average price of $.90 on the dollar.

This morning, UPS lowered guidance and it now expects to make $.86 per share, down from $.96 per share. Weak economic conditions were responsible for the miss and fewer packages are being shipped.

The take-away from yesterday’s release of the FOMC minutes is that the Fed now believes that a recession is likely. On a global basis, the IMF anticipates a mild recession in the US and slowing economic conditions in Europe.

Tomorrow, the ECB and the UK will reveal their monetary policies. I am not expecting any surprises since the ECB has not flinched in the midst of deteriorating economic conditions. They will stand pat on their inflation fighting mission. Consensus is that they will not lower rates.

As I scan the market for bullish opportunities, it concerns me that the vast majority of trades are commodity related. Rising commodity prices will ultimately translate into inflation and higher interest rates. I can’t find follow through in any other strength and the market needs broad based participation to mount a sustained rally.

As I have been mentioning, I believe that the market is getting a little too relaxed with the news from the financial sector. The write-downs are enormous, new capital is dilutive to current shareholders and top line growth is many months away. The loans that do come in will generate nice profits since there is a huge spread between the cost of capital and the consumer’s rate. However, consumers are tapped out and the unemployment rate is rising.

I’m not looking for a retest of the lows, but it would not surprise me if the XLF dropped down to 24.50 next week.

All things considered, this is a great time to take profits and to stay liquid.

For today, the market has topped out and I feel the bears will test the downside. That move is likely to continue next week. However, the bid to the market has returned and shorting this market will be tougher than it has been. Don’t get too cute by trying to short this move. If you do, go small. The best play will be to get long on a pullback to SPY 130. Be patient. 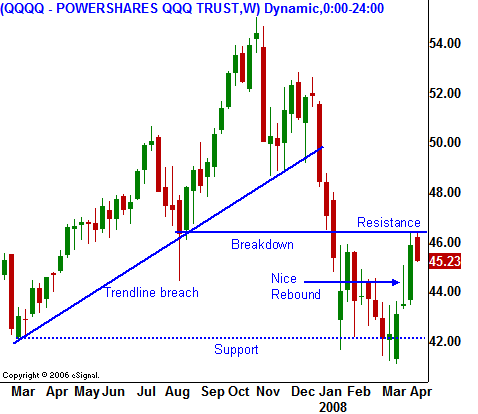