Yesterday, the market struggled to recover from a lower open and it made it into positive territory. By late afternoon, the sellers stepped in and pushed it into negative territory. Late selling is a bearish sign.

Before the open, the S&P 500 futures were down five points. Concerns of a potential global interest-rate hike set a negative tone. Asian markets were mixed and China was down again. It has lost 50% of its market cap in the last eight months. Europe is weak today and emerging markets have also been rolling over. On a global basis, there are not any pockets of strength.

Inflation is a major concern around the globe. China increased its reserve requirements yesterday and it has maintained this policy for more than a year. The only stock’s that are rallying are commodity-based and that is not healthy for the market.

This morning, oil inventories declined by more than 4 million barrels when a decline of 1.4 million barrels was expected. Energy prices are moving higher. Grain prices are also likely to move higher as heavy storms flood the Midwest. These violent storms might continue since we are in a La Nina weather pattern. Meteorologists are predicting an active hurricane season.

Higher unemployment and rising inflation are a nasty combination. This week, the Fed Chairman indicated that the focus is now on inflation. That means we could see higher interest rates in the near future.

This afternoon, the Beige Book will be released. It will have an impact on the market. If the market reacts negatively, you can take short positions. If it has a positive reaction, wait for that rally to stall and sell OTM call credit spreads. That report is backward looking and I don’t think any “signs of hope” will be substantial enough to generate a sustained rally in this environment.

As you can see in today’s chart, the price action is very weak. The market has broken below support at SPY 138. I believe it will find support around the 132 level. That is a horizontal support level that dates back to March of 2007 and August 2007. In April, we had two strong up-gap days from that level with strong follow through. If this support level is breached, we could retest the double bottom at SPY 126 later this summer. At this stage I think the probability of that happening is low.

On an intermediate term basis, I still believe the market will trade between SPY 132 and SPY 142 through August. On a short-term basis, the negative news keeps coming and the momentum points lower. If you have been selling OTM calls spreads for the last few weeks as I have suggested, you should have a full position by now. I am buying a few put positions in the retail and defense sector (small size) but I am overall satisfied with what I have on right now. My positions are working for me and I am managing profits.

As this market continues to slip, you will eventually see a big drop in commodity stocks. When that happens, it will set up a nice buying opportunity – be patient. Once the market finds support, tech will also be of interest. It is getting pounded now so stay clear of tech. 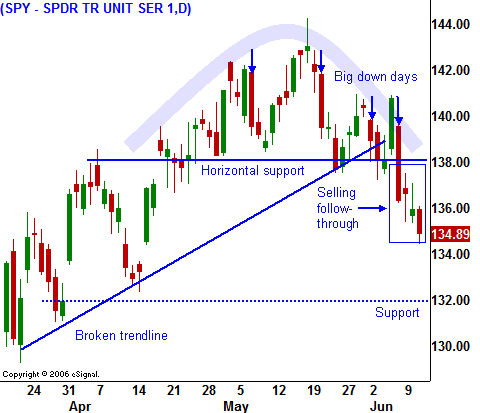