Over the last few weeks, we have seen a number of big down days. Once the momentum is established, the selling continues right into the bell. That’s exactly what transpired yesterday and the price action is very bearish.

Worries of a global hike in interest rates, higher oil prices and concerns in the financial sector all weighed on the market.

This morning, India raised its interest rates by a quarter of a point and they now stand at 8%. Yesterday, China raised its reserve requirements and it has continued to tighten monetary policy over the last year. Vietnam has a 25% inflation rate and that serves as one of many examples. Banking officials around the world are taking action. Today, the Philly Fed President said that interest rates will need to move higher to combat inflation. Ben Bernanke hinted the same when he stated that the Fed’s focus had shifted from the economy to inflation. Rising interest rates will keep a lid on this market.

Wednesday’s oil inventory numbers showed a much bigger than expected draw and energy prices moved higher. The likelihood of an oil pullback in the next two weeks has diminished. Traders that were long the front month futures contract that expires next week have rolled out their positions. As they did so, that could have created a short-term decline in oil prices and it could have flushed out some speculators. That did not happen and oil is likely to move higher. The oil inventories have shown a much bigger than expected draw for the third straight week. Discussions on how to deal with Iran’s nuclear facilities is elevating the risk premium in oil. Israel has threatened an air strike. The La Niña weather pattern traditionally brings hurricanes to the Gulf of Mexico and the potential for supply disruptions is high. When you add it all up, high oil is here to stay for at least the summer.

A management shakeup at Lehman has the stock trading lower today. One positive sign is that all of the other financials are rallying today and the market feels that Lehman’s woes are isolated. This entire sector still has many issues to resolve before it can move higher.

Retail sales posted a bigger than expected gain of 1% in May. While that number beat expectations, the increase is attributed to the rebate checks. Once that stimulus flows through, this sector will be in trouble. If you strip out gasoline sales, the retail figure would only be up by .8%.

Jobless claims rose more than expected and they increased to 384,000. The four-week average has been 369,000. The biggest threat to the economy at this stage is a loss of jobs. If people can’t finance their high debt levels, the credit crisis will spread quickly.

The market is bouncing from an oversold condition. However, the headwinds are blowing strong and I believe this rally will be short lived. Tomorrow, we will get the CPI. If you recall, last month’s CPI number came in better than expected. It showed a decrease in gasoline prices because of a seasonal adjustment. In reality, we know that prices at the pump increased by 11% in April. I believe the seasonal adjustment will correct itself, The CPI will come in “hot” and the Fed’s recent shift in priorities will become clear.

Asian markets were hit hard overnight and European markets are bouncing from an oversold condition. As the day wears on, I believe this market will hit headwinds. The support level at SPY 138 now represents resistance. I will be selling into this rally and I believe tomorrow’s CPI number will generate a negative reaction. Last month, when the number beat expectations, the market reversed after an initial rally. Traders were able to sift through the number and pull out the misleading information. We all know that prices are on the rise around the world.

You can probably guess my favorite strategy. Sell OTM call credit spreads on stocks that have been in a longer-term downtrend. Financials have made their move and I would avoid that sector at this stage. I do like selling calls spreads on retail and restaurant stocks. Use the bearish stocks at the top of the Live Update table as your guide. 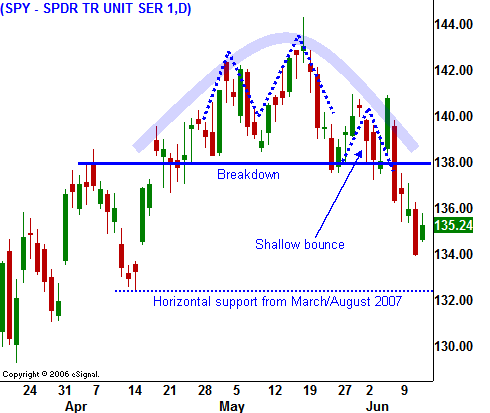