Yesterday, the market tried to rebound from a nasty decline last Friday. As the day wore on, the bulls stepped back and prices weakened.

The largest one-month unemployment spike in 22 years spooked investors. As long as people had jobs, the “soft landing” scenario seemed viable. Mortgage foreclosure rates are on the rise and that trend will continue as people lose jobs. Over the next few weeks, there are a large number of mortgage resets and they are likely to add to the problem.

This morning, the Fed Chairman voiced concerns over inflation and the market reacted negatively. He said that a major economic crisis has been avoided and that they would not sit idle as inflation accelerates. For the last two weeks, I have been stating that “Fed speak” is pointing towards higher interest rates. They have addressed the economy in recent months and now they are shifting their focus to higher prices.

Oil prices are rallying and most of yesterday’s losses have been recovered today. Senator O’Bama wants to impose windfall profit taxes on oil companies. I agree that the subsidies to large oil companies need to be halted, but this tax policy will not increase the supply of oil. He will also increase capital gains and dividend taxes. His policies are not market friendly and in the absence of other news, his rhetoric is scaring investors.

The financial sector has pulled back to support and it seems poised for the next leg down. We are currently near the capitulation low from March on the XLF. This time, prices have continued to drift down to test that support level and it is possible that we will fall below it. Even though Lehman was able to raise $6 million in capital, the stock still feels very tenuous.

Tomorrow, there are two “landmines” for the market to navigate. After the open, we will get the oil inventories number. A rally in energy prices will weigh on an already weak market. The last two weeks, a build in oil inventories was expected and we got the exact opposite. There’s a lot of “saber rattling” with regards to Iran and their nuclear facilities. That is only elevating the risk premium in oil. Wednesday afternoon, we will get the Beige Book. It will reveal regional economic strength/weakness across the country.

The market has breached a horizontal support level at SPY 138. This should start sounding like a broken record since it has been a part of my daily comments for the last two weeks. The number of big down days is increasing and the resistance level is formidable at SPY 144. In today’s chart, you can see that tech stocks have formed a double top. As I write this, they have broken the highlighted support level. This was one of the strongest sectors and it has succumbed to selling pressure.

The A/D is a negative 1:3 and I believe the market will drift lower throughout the day. The first level of support is SPY 133. That was the low from March (2007) and August (2007) and there were two significant gap up rallies from that horizontal support level a few weeks ago. 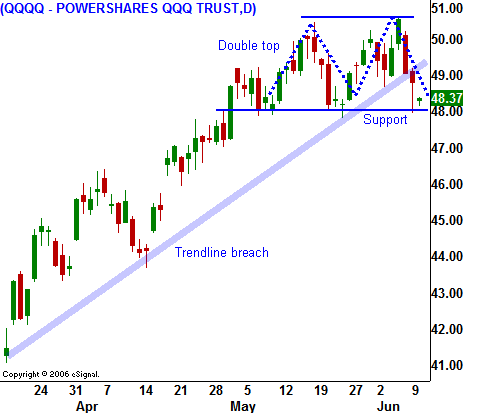