The market is bouncing from an oversold condition and that move should stall next week. The headwinds are blowing strong and technical damage has been done (breakdown below SPY 138). I believe this rally will be short lived. Shallow bounces, heavy overhead resistance, selling into the close and a rising VIX are all warning signs.

This morning, the CPI came in “hotter” than expected. May prices rose by .6% when an increase of .5% was expected. Core prices were up .2% and that was in line with expectations. The market had priced in a big number and it rallied on the release.

Consumer confidence has dropped to a 28-year low. That will impact how consumers spent their rebate checks. Next week, BBY will announce earnings and we will see how many people spent their checks on big screen TVs.

Next week the most significant economic release is the PPI. It has been coming in “hot” and it could weigh on the market. Jobless claims, oil inventories, industrial production, LEI and the Philly Fed will also be watched closely

On the earnings front, GS, FDX, and MS will release next week. FDX has been in a steep decline this week and the market is bracing itself for weak guidance. GS and MS will reveal the strength of the investment banking group. I am expecting a decent number and financials could rally after the release. The XLF has found support even with the dismal news from Lehman this week.

Option expiration tends to have a bullish bias but that should not be the case this month with the market trading near its one-month low.

Weak retail sales (that were helped by stimulus checks), inflation fighting rhetoric from the Fed, rising unemployment and high oil prices are going to keep a lid on this market.

The market will hit overhead resistance at SPY 138 and any substantial rally is a shorting opportunity.

Today, the market has hit a brick wall after establishing the intraday high. If it can’t breakout by early afternoon, it will give back the gains ahead of the weekend. 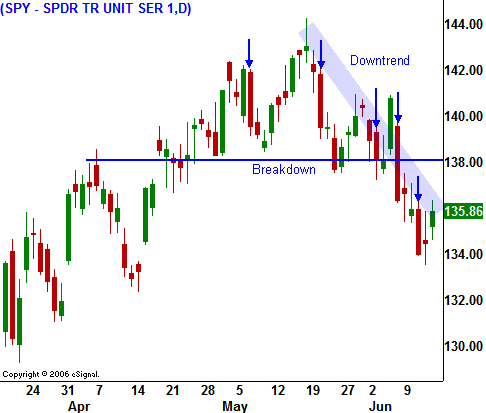