Brace Yourself For Quadruple Witching – Wait For Option Trading Opportunities.

Last week, the market traded lower and conditions could have really gotten ugly if not for a nice rally on Friday. The trend for the last month has been lower and substantial resistance at SPY 144 will continue through August.

This morning, Lehman released dismal earnings, but that news was already factored into the stock. AIG ousted their CEO and “heads continue to roll” at major financial institutions. The big news will come when Goldman Sachs (Tuesday) and Morgan Stanley (Wednesday) release earnings before the open. Goldman Sachs has traditionally beat estimates and I wouldn’t be surprised if they “pulled another rabbit out of their hat”. Major financial stocks seemed to be compressing and a support level is forming. On the other hand, regional banks continue to make new lows.

Tomorrow, the PPI will be released. The market has been able to shrug off rising inflation because it has been confined to food and energy and the increases have not flowed over to consumer goods – yet. Producer prices have been climbing and a “contained” CPI tells me that companies are not able to pass on higher costs. Eventually, these higher costs will impact profitability.

The Fed has shifted its focus from the economy to inflation. Global interest rates are on the rise and inflation is widespread. After an eight week hiatus, the FOMC will meet next week. Traders will be looking for any signs that interest rates will move higher in the near term.

Over the weekend, Saudi Arabia announced that they are going to increase production. They are the only OPEC member with the capacity to boost supplies quickly. A month ago, they pledged to increase supply by 300,000 barrels per day and now they will be pumping an additional 500,000 barrels per day. This increases Saudi oil production to 10 million barrels per day, the country’s highest ever. Some analysts feel that this is a stretch since the newly discovered Khursaniyah fields is not producing to full capacity yet. Oil prices hit a new record high today even after the Saudi news.

This morning, Asian markets were up big in response to our rally last Friday. On the negative side of the ledger, the Empire State index fell to -8.7 indicating lower factory activity and J.P. Morgan downgraded GE (the stock is down marginally).

This is a quadruple witching week and that tends to have a positive bias. The market is oversold and a rally is possible this week. However, on a longer-term basis, I believe the market will work its way lower over the course of the next month.

Unemployment and inflation are on the rise, the Fed has hinted of higher interest rates and corporations are “eating” higher costs (profit margins will suffer). I would sit tight and wait for a rally to materialize. Selling out of the money call credit spreads on regional banks, retail and restaurant stocks is the way to go. Once the rebate checks flow through the economy, these stocks will weaken.

I would also avoid buying commodity stocks at this juncture. They feel “heavy” and I don’t believe they have much upside currently. Oil stocks have failed to jump higher even though energy prices are spiking and that has me avoiding this sector.

The market staged a surprise rally late last Friday. Today, it has been able to overcome early weakness. There seems to be strength and a small rally is possible ahead of Goldman’s earnings release tomorrow and the PPI. Keep your powder dry and hope for a rally. Selling into it is still the highest probability trade at this juncture. I do not believe the market will get through SPY 138 today. 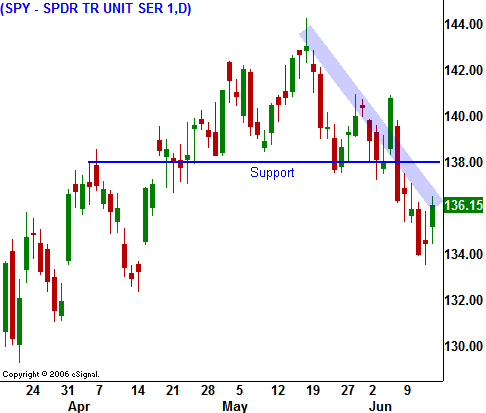