The Market Is Gathering Ammo For Its Next Down Leg!

This morning, the sell off from Monday has gained momentum. Overseas markets were down 2% on average and the financial sector is largely to blame.

The PPI was released before the open and it shot up at the fastest rate in 27 years. Wholesale prices rose by 1.2% in July and an increase of .5% was expected. I thought that the market would be able to rebound from a “hot” number, but core prices which exclude food and energy rose by .7%. This number is very concerning since it puts pressure on the Fed to raise rates. Germany also released its inflation numbers and they were similarly “hot”. This will also keep in the ECB in a hawkish mood.

Fannie Mae and Freddie Mac have been grabbing headlines this week. They are in dire straits and they have a credit auction taking place this week. Traders will be gauging the appetite for these securities. A poor showing will confirm the need for a bail out.

The bulls were able to establish a nice uptrend from the July lows, but that has been breached today. The market could not generate enough buying to stay above SPY 130. I view that you as a major negative, particularly since oil prices have pulled back sharply. This was a wimpy little bounce and the SPY 126 support level will be taken out shortly. That will pave the way for us to test the July lows.

We are heading into a seasonally weak period and historically, the market has struggled during the next two months. For the last month, the market has been able to bide its time and work off an oversold condition. I believe it is gathering ammunition for its next leg down.

We are in a light volume trading environment and I would not take any large positions at this time. If the market closes below SPY 126, short consumer discretionary stocks. 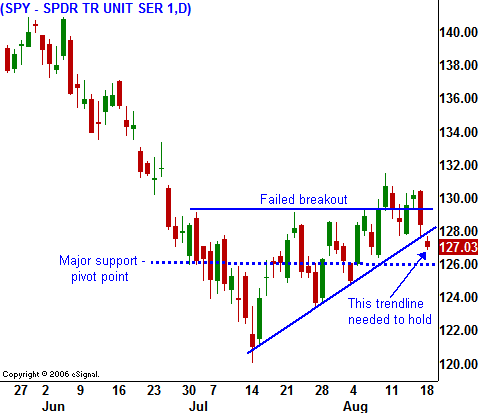