If The Market Does Not Stage A Rally Soon – It Will Breakdown!

This morning, the market is trading lower and once again, credit concerns are at the forefront. Most of the major financial banks have captured headlines at some point over the last month. Even Goldman Sachs and J.P. Morgan (two of the most stable financial institutions) have started to show signs of weakness. Some analysts believe that 1000 banks could fail before this is all over.

Financial institutions have already taken $400 billion worth of losses and the consensus seems to be that we are less than halfway home. Fannie Mae and Freddie Mac are in a desperate situation and it seems likely that the U.S. Treasury will have to recapitalize them at the taxpayer’s expense.

The market has been trying to claw its way back. Stable interest rates and lower commodity prices have not been able to generate the type of rally bulls had hoped for. In today’s chart, I have highlighted the intermediate term downtrend. The fact that we broke below the double bottom in July was bearish. The market has overhead resistance at SPY 133. While the market has been able to get above 126 support, it needs to generate a rally – SOON. If we don’t get a rally, that support level will be tested and it will probably fail.

This morning, Home Depot released worse than expected results. With the exception of the Nikkei, foreign markets are down overnight. These negative influences are weighing on the market and the A/D is a negative 2:3. I expect the market to drift lower today. There simply aren’t any catalysts to drive it higher and the early momentum has been established. This is likely to be a very quiet week. There are not many economic releases or earnings announcements for the market to lean on.

The oil inventory number on Wednesday could provide a spark if oil continues to move lower. Thursday, the initial jobless claims number could weigh on the market if it continues to grow. I do not believe the PPI number will have a long lasting effect. It is likely to come in “hot”, but given the recent decline in commodity prices, I believe the market will dismiss the number after an initial negative reaction.

We are truly in “no man’s land”. If we get a convincing close above SPY 130, go long in small size. If we break below SPY 126, get short and be fairly aggressive. If we stay here, do nothing. 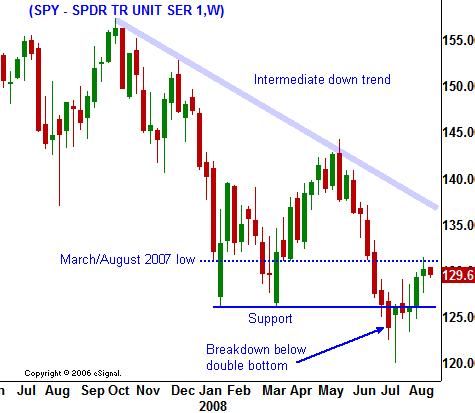