The message to politicians should be loud and clear, “pass the bailout… or else”. The market tanked Monday after the proposal was rejected. We witnessed the worst one-day decline since October 1987. In good faith, the market rallied Tuesday on the notion that legislators would not let us down.

What started out as a simple three-page proposal now includes vital elements like removing the excise tax on wooden arrows and lowering import taxes on Puerto Rican rum. I would love to know the names of the politicians who put these items ahead of a national crisis. They should be shot.

At a time when confidence is running low, politicians needed to put their differences aside and demonstrate to the world that they can work in unison to resolve a major problem. Instead, we get the same old self-interest crap and fighting across the aisle.

Banks no longer trust each other due to counterparty risk. Credit is tightening quickly and a rising LIBOR rate (a measure of interbank interest rates) reflects this.

GM reported a 19% decline in car sales last month and Ford reported a decrease of 34% domestically. I’ve heard reports that consumers with a 650 credit rating are being turned down for new car loans.

Misery loves company and the rest of the world is fading fast. The “hawkish” ECB Chairman finally admitted that conditions are deteriorating. Until recently, he has supported an interest rate hike. Last weekend, a consortium of European countries bailed out a large insurance company (Fortis). The governments took an equity stake and mandated that they sell their stake in ABN Amro. To date, there are no suitors. On the home front, Citigroup bought Wachovia. The street was not crazy about the deal because Citigroup might have issues of its own. As banks consolidate, they truly become “too large to fail”.

Last night, the Senate approved the bailout. That was largely expected and the market barely reacted. Tomorrow, the House is expected to vote and consensus is that it will pass. Today’s market decline should convince swing votes to approve the plan. If it gets voted down, we will see a meltdown of historic proportions. I expect the plan to be approved, but I am not expecting a huge rally. The circumstances are dire and this will temporarily keep us afloat.

The government still has to raise capital for the bailout and we will gauge the appetite of foreign investors. Analysts are quick to point out that we could make money on this bailout. Those statements are reckless and the banks themselves can’t even price the assets. We don’t know the current extent of the damage. As the economy continues to deteriorate, the problem will worsen. Yesterday, ISM manufacturing came in at a dismal 43.5. By most measures, that is a recession level. This morning, factory orders were down and initial jobless claims rose to a seven-year high. Friday’s Unemployment Report will be frightening. To an extent, the market is already factoring in a bad number. In the last three months we have seen a decline the day before the report is released.

Our country is straddled with a mountain of debt that spans from the government to the people. On a federal level, a slowing economy is a double whammy. Income tax revenues decline and transfer payments (unemployment/welfare) increase. Add a huge bailout and a war to the tab and you have a problem. On a personal level, as the jobless rate climbs, people are not able to make their payments. They have no savings to draw from (60% of baby boomers have less than $100k saved for retirement) and loan defaults will rise. This problem exists with or without a bailout. The difference is that a bailout will give us time to work through this situation. It could take a decade or more for us to get through this problem. We won’t be able to spend our way out of this one. The world is getting tired of financing our lifestyle.

If we do not get a rally after the plan has been approved, look out below. Global markets are rolling over and fear is spreading. As you can tell from the tone of my commentary, I am bearish. Any decent rally can be shorted. The market has broken below support levels and it is in a steep downtrend. 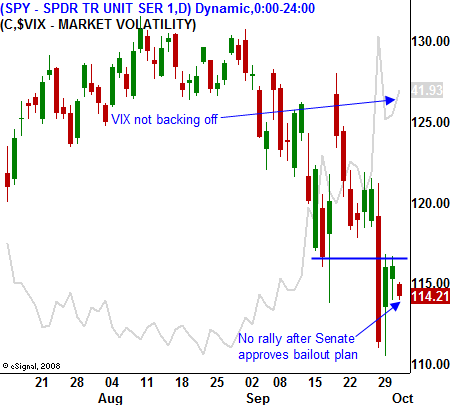