Don’t Buy The Fed Bailout Rally – Wait for A Chance To Go Short!

Now that legislators have reconvened, traders are optimistic that a bailout plan will be approved today. Yesterday, we saw a huge relief rally on extremely light volume. I would not give that rally much credence.

Politicians witnessed the largest one-day drop since October 1987 and constituents voiced their concern. Traders are betting that Congress doesn’t want to be responsible for a market collapse and they rallied the market on the premise that a deal would get done today.

On a macro basis, no one wants to bailout a company that made poor business decisions. On a micro basis, Americans don’t want to bail out their neighbor who lived beyond their means. Unfortunately, our financial system will collapse if we let the liquidity problem spread. The government needs to step in quickly.

Although a relief rally will set in, I doubt that it has “legs”. The credit crisis is global and LIBOR rates have jumped. This indicates unwillingness for banks conduct business with each other.
Monday, Fortis received a $16.4 billion government bailout (Belgium, the Netherlands and Luxembourg). The cash injection stopped a run on one of the countries’ largest retail banks. In return, they demanded a 49% stake and ordered Fortis to sell off the operations of ABN Amro it bought for 24 billion euros ($34 billion) a year ago — a humiliating end to a strategic move that brought ruin upon shareholders. To date, no suitors have stepped up.

The US bailout plan will help us avoid a financial collapse, but the problem still exists. Debt levels are extremely high and economic conditions continue to deteriorate. This morning, ISM Manufacturing plunged to 43.5. That level signifies a recession and it is the lowest reading since 2001. Friday’s Unemployment Report will be dismal and I am expecting a selloff heading into the number. This year, we have either seen a sell-off Thursday ahead of the release or the following Monday.

Japan was faced with a similar situation 20 years ago; however, the problem was contained to their economy. They took similar bailout steps to avoid a financial collapse and their government still holds $9 billion worth of assets after two decades. The Nikkei is still at 1/3 of its peak value. We could be looking at a similar situation.

The average baby boomer has less than $100,000 saved for retirement and in 12 years (not including this bailout) our government will dedicate 100% of its national budget to paying interest on the national debt and entitlement programs (Social Security). We will be forced to cut spending, there’s nothing left.

Watch for a relief rally that follows the approval of a bailout plan. We have survived a massive heart attack, but we are far from healthy. Once this rally exhausts itself, a nice shorting opportunity will set up. That could unfold as early as tomorrow. Today’s reaction will set the tone.

If the market can barely generate a rally and it reverses quickly after the news, a very bearish move lies ahead. Wait on the sidelines for a good shorting opportunity and don’t buy into the rally. 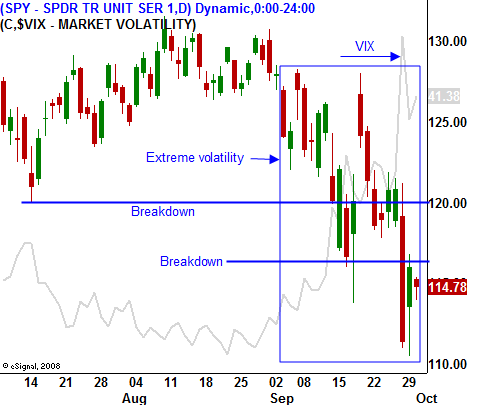