The Fed Bailout Should Get Approved – The Market’s Reaction Is Critical!

The market is in a holding pattern ahead of the bailout vote. The consensus is that it will get passed. Politicians saw the aftermath of what happened Monday when they voted it down.

Yesterday, the market tanked ahead of the Unemployment Report. Every month this year we have witnessed job losses. Last month, nonfarm payrolls fell by 159,000. Analysts had forecasted a drop of 105,000. As people lose their jobs, the credit crisis will spread far beyond subprime. The ramifications of the current credit squeeze will not be seen until next month.

The CEO of AutoNation described a very dire situation on CNBC this morning. He said that consumers with a prime credit rating normally get approved for auto loans 90% of the time. That figure has fallen to 60% in recent weeks. Subprime borrowers traditionally received loan approval 60% of the time and now only 10% qualify. This week, General Motors announced a 19% drop in auto sales (Sept) and Ford announced a 34% drop in domestic sales (Sept). This is only one industry, but it depicts the state of our economy.

The bailout plan is critical and it will get approved. However, it might not solve the current credit crisis. Banks are avoiding counterparty risk and the LIBOR rate (which measures the willingness of banks to conduct business with each other) is shooting higher. The Fed will still need to raise the capital and deploy it.

This could take months. The Fed will need to engage in price discovery before they can even make a bid for assets. If the market stages little rally after the bailout is approved, we are headed lower. We need to see a substantial rally with follow-through to get the “bid” back. Otherwise, investors will see this as an opportunity to unload shares. Confidence has been destroyed and fear is driving this decline.

I don’t have much faith in the market and I am inclined to fade any stalled rally. If you look at the chart, you can see that every rally has been sold recently. If we get a good reaction, I will stay on the sidelines. I’ll patiently wait for sign of weakness or signs that a temporary low is in. 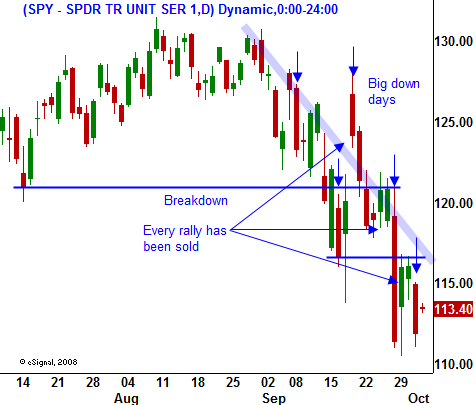