This week started off on a rather suspicious note. Monday, the market could not generate any momentum after rallying 10% last week. We needed to see follow-through and an immediate breakout above SPY 100. That would have sparked a short covering rally. Tuesday, the market embraced the idea that we would finally elect a President and a decent rally ensued. The market briefly closed above SPY 100, but the momentum was lacking. In yesterday’s commentary, I mentioned to exit longs and to prepare for another decline. By the close, prices had deteriorated significantly and the S&P 500 fell by more than 50 points.

Overnight, the Bank of England lowered rates by 1.5% when a .5% rate cut was expected. Dramatic action was required after their unemployment rate fell by a record amount and wages dropped for the first time in five years. The ECB lowered rates by .5% and that was largely expected. ECB Pres.Trichet has his head in the sand. He said that he does not see a credit crisis. What most people don’t realize is that European banks are in much worse shape than US banks. They still have 2 to 3 times the amount of leverage that US banks currently have.

In the last week, we have seen rate cuts in: China (the third in six weeks), Japan (the first in seven years), the US (lowest Fed Funds Rate since Eisenhower), Australia, Norway and others.

The unemployment rate in the US will continue to climb. Tomorrow’s number has traders nervous and the market is likely to decline all day. A rising unemployment rate will intensify the credit problems and credit cards are the next shoe to drop. Mortgage defaults will spread from subprime into traditional loans. The Fed is also impacted. Income tax revenues fall as unemployment rises and transfer payments (unemployment compensation, welfare) increase. In the next two months, the Fed will have to start bailing out states that can’t meet unemployment compensation. Five states currently have less than two months of funding left. They include New York, Florida and Ohio (three of the biggest states in the US).

The big three automakers are also in dire straits. They will be knocking on the Fed’s door today. They will be asking for a $25 million “bridge loan”. AIG was also just looking for a “bridge loan”. Most of the $80 billion has already been used up and many speculate that asset write-downs had been understated prior to the bailout. Gm’s cash burn rate is already at $1B per month and analysts suspect that it has gone up substantially in the last month. We will know when they release earnings tomorrow.

This week’s economic numbers have been devastating. ISM manufacturing and ISM services fell dramatically. Today, retailers reported some of the weakest sales in more than a decade. Consumers stuck to basics and Wal-Mart was the only one to post a decent gain.

The 10% bear market rally we saw last week was lame. From a deeply oversold condition, I expected the SPY to fill in the gap from 110. Now that we have fallen below SPY 100, we are likely to retest the 85 support level. The last two days of selling have been relentless. No one wants to stick their neck out and shorts have no reason to cover. Every little rally has been easily squashed. After a brief pullback, the VIX is on the rise.

Look for continued selling into the bell. I expect a big decline today and a muted response to a weak number tomorrow. Additional selling pressure will resume next week if the unemployment report shows a greater than expected loss of jobs. 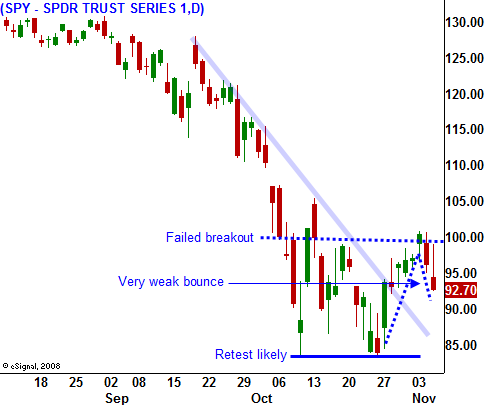