The Momentum Has Stalled – Take Profits On Longs – Be Careful!

The election was a landslide for the Democratic Party. The market had already factored in an Obama win since he has consistently been leading the polls. The Democrats added to their representation in the House and now they have a majority in the Senate. I would normally argue that balance is good, but this time is different. Our situation is dire and we need to act quickly and decisively. That can’t happen when both parties are gridlocked. I hope the Democrat’s game plan works.

The recurring theme that starts with the Fed and ends with Americans is debt. We have to stop spending more than we make. Every recession has been avoided through accommodative monetary policies.

Stimulus packages are also being approved. Japan has a $50 billion plan and Germany just approved a $64 billion plan. The Democrats are already discussing another stimulus plan in the US.

This artificial support is spreading and the entire world is printing money like crazy. Who is going to finance all of this debt?

We needed all of these actions to avoid a financial collapse. These moves will not get us back on track, they will simply buy time. I have personally tightened my belt over the last few years and I suggest that you do the same. From an investment standpoint, I believe being short stocks is the way to go for the next few years.

I am an optimist and it’s hard for me to come to grips with my forecast.

In 12 years, 100% of our national budget will go to paying interest on our national debt and to entitlement programs (Social Security, unemployment, welfare, Medicare). There won’t be a dime left to invest in our future. These figures don’t even include all of the recent bailout debt and that timeline will move forward. The average baby boomer has less than $100,000 saved and they expect to collect Social Security.

A freight train is coming and this credit crisis is just the beginning. If we are lucky, a nice orderly decline will result and we will have time to adjust to a lower standard of living.

President-Elect Obama has made history and we need change. Unfortunately, many people are looking to the government for help when they should be managing their own situation. Americans will have to accept lower pay, work harder and save more to turn this boat around.

As I’ve been mentioning in my blog, the market needed to convincingly close above SPY 100 on Monday for us to have a chance at a snap back rally. We inched through that level yesterday and the momentum has stalled. This morning, prices have easily reversed below SPY 100 and as the Unemployment Report approaches, the bears will take control.

If you have been selling out of the money puts, you should have plenty of cushion. Identify a support level that you feel will hold and place stops to buy back your puts if it is violated.

AN ECB/BOE rate cut could spark an overnight rally, but that move is largely expected. A weak jobless claims number tomorrow could spook traders ahead of Friday’s Unemployment Report. Given the weak attempt at a breakout, I believe the market is ready to roll over. It’s still premature to take bearish positions, but at very least you should take profits on long positions. It’s always best to error on the side of caution when trading against the trend. 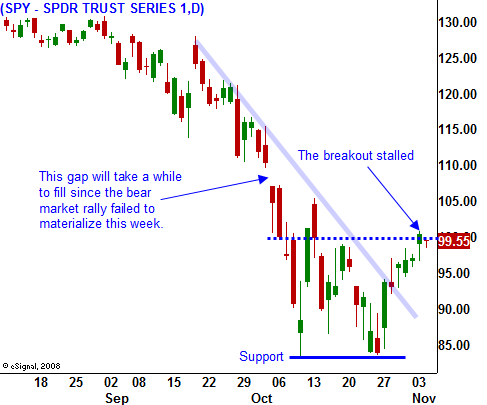