Just An Oversold Bounce – Look for More Selling Next Week!

ISM manufacturing, ISM services and retail sales figures all weighed on the market this week and traders headed for the sidelines ahead of the Unemployment Report. Interest rate cuts around the world were not able to stop the market decline.

Central banks around the world are throwing the kitchen sink at the problem. Liquidity has improved and the credit situation has temporarily stabilized. However, the underlying problem still exists. Mountains of debt and poor lending decisions that have accumulated over decades are threatening global markets.

In addition to the $700 billion bank bailout, the Fed will have to bail out states as they run through their unemployment compensation reserves. Five states have less than two months of funding left and they include New York, Ohio and Florida. The big three automakers are burning through cash at an alarming rate and without a “$25 billion bridge loan” they will fail in a number of months. This is in addition to the already approved $25 billion. The bailout line in Washington continues to grow.

J.P. Morgan Chase stated that credit card charge-offs may rise above 5% in the fourth quarter and increase next year. Last year, they were at 3.6%. This is an increase of about 40% year-over-year.

European banks still have 2 to 3 times the leverage of US banks and they could be in serious trouble. The ECB continues to keep rates high and their central bank President feels that there is not a credit crisis.

There is not a shred of good news coming out of this market. Money is heading to the sidelines and no one wants to stick their neck out until there’s evidence that conditions are improving. That could take years to materialize. In the meantime, someone is going to have to finance all of this debt.

This week there was an opportunity for buyers to “put the squeeze” on shorts. A rally Monday and Tuesday could have fueled the SPY to 110. That should have been a relatively easy task given the depth of the recent decline. All we could muster was a 10% rally last week that took us back to short-term resistance (SPY 100). The lack of follow-through indicates intense selling pressure and the bears are confident.

As you can see in the chart, every rally stalls before it can get going. In the last few months, the market has declined ahead of the Unemployment Report. The actual number yields a muted reaction, but the selling continues the following week. Given the weak attempt at a rally and the dismal outlook, support at SPY 85 will be tested next week.

For today, the market is bouncing after a 2-day 100-point decline in the S&P 500 futures. It might be able to hang on to these gains, but I don’t see it heading much higher. There is a chance that sellers will knock the market down heading into the weekend. I am favoring the short side today and into next week. 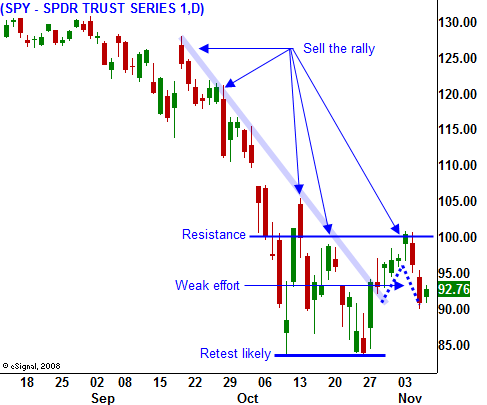