The Market Will Retest SPY 85 This Week!

Last week, the market had a legitimate chance at a snap back rally. We had just come off of a 10% bounce and seasonality factors were very bullish. Any sustained buying would have pushed the SPY well above 100 and it would have sparked a round of short covering. Ultimately, that rally could have filled in the gap from SPY 110 that happened early in October.

Unfortunately, that scenario did not unfold. After a small pre-election rally, concerns over the pending Unemployment Report weighed on the market. Wednesday and Thursday were extremely weak and our anxiety was justified. Last month alone, 500,000 Americans filed new unemployment claims. We lost 240,000 jobs and the unemployment rate rose to 6.5%.

Over the weekend, leaders from the 20 largest global economies (G20) met to discuss the credit crisis. Over $4 trillion in bailouts, credit guarantees and fiscal spending have already been pledged by various central banks around the world. China joined in with a domestic $600 billion plan of its own this weekend. As opposed to buying sovereign debt, it will build infrastructure and improve social services. This announcement sparked a 7% rally in Asia.

Our market opened on a positive note and quickly started to slip. Apart from China’s move, the only encouraging news came from McDonald’s. Fast food has become the world’s favorite “comfort food” and people are gorging on Big Macs to cope with tough conditions.

On the negative side of the ledger, financial institutions continue to post huge losses. Fannie Mae recorded a $29 billion quarterly loss. The Fed will have to commit additional capital to keep its promise of keeping shareholder equity at a positive level. Billions of dollars will be needed just so that it can maintain routine operations. HSBC is writing down $5 billion in bad debts on US home loans and asset write-downs. The Fed announced a new $150 billion financial rescue package for AIG today. The original lifeline ($80B) was insufficient that it became clear that more capital was required. Fed officials expressed confidence that the money would be repaid to taxpayers.

General Motors is lobbying for a financial bailout. It has a $7 billion quarterly burn rate and it will run out of money in the first quarter of 2009. It is using AIG’s tactic by only asking for $25 billion. It takes them five years to retool and to bring a new car to market. This “bridge loan” would be nothing more than life support. Chrysler and Ford are in similar situations. The government is aware of this and they are reluctant to take a “bite of the apple”. The UAW has supported the Democratic ticket and in all likelihood, a bailout of some sort is likely. The TARP grows larger and the Fed is running out of fingers to stick in the dam. Brokerage firms downgraded GM and the new price target is zero.

Unfortunately, the second-largest electronics retailer is not in the car business. They are “not too large to fail” and today Circuit City is filing for bankruptcy. It has $2.3 billion of debt and its largest unsecured creditors are Hewlett-Packard, Samsung and Sony. It is trying to keep its doors open through the holiday season. Retailers buy on credit and sell to consumers who rely on credit. In today’s environment that is a tough business model. Last week, retailers posted dismal results across the board. Wal-Mart and some of the “dollar stores” are the only ones with positive results.

Express shipping is often used as a benchmark for economic activity. Today, DHL announced that it will cut an additional 9500 jobs and it will spend $4 billion (twice the previous estimate) on restructuring.

The bad news keeps pouring in and the market can’t sustain a decent rally. This week, additional hedge fund selling is likely. Investors must submit their redemptions by November 15th and they won’t miss this “window of opportunity”. The shallow little rallies indicate intense selling pressure and we are likely to test the SPY 85 support level this week. My gut feeling is that it will fail.

Normally, when you see a decline in the VIX, is a bullish sign. However, I believe this time is different. Implied volatilities spiked to unprecedented levels. As long as the selling has an orderly pace to it, the VIX can actually come in while the market is declining. Central banks around the world have temporarily prevented a financial collapse. All of their efforts have not solved the problem, they have simply provided for an orderly price discovery process.

The problem is debt that has accumulated over decades. The solution is deleveraging and the process will take a long time. Americans will work harder, make less and retire later to pay for their current lifestyle.

I currently like being short stocks. The liquidity is better for the underlying stock and I can adjust quickly. Puts are expensive and the only way to trade options is to create synthetic short positions. I am selling nearer term out-of-the-money call credit spreads (bearish call spreads) to purchase longer term out of the money put debit spreads (bearish put spreads). This is a good strategy in this environment and I like being short the retail sector. 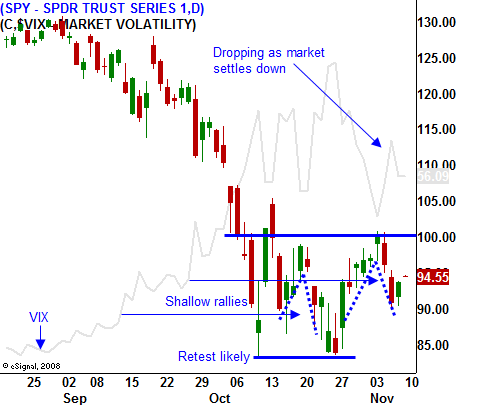