Yesterday, the market gradually started to recover from its big loss on Tuesday. As the day progressed, the buying picked up and we had a full-blown rally on our hands. Unfortunately, that was a one-day event and those gains are being stripped away this morning.

The bad news started with higher than expected initial jobless claims. They now stand at a seasonally adjusted 589,000. That is the highest level since 1982. Continuing claims increased by 97,000 and they stand at a very concerning 4.6 million. Unemployment is the most critical piece of information. It will determine the depth and duration of this economic cycle.

Regional Banks have fared better than their larger counterparts so far. However, now we are seeing weakness in that group as well. Fifth Third, SunTrust, KeyCorp, Regions Financial and PNC were among the banks that missed estimates this week. The insurance group is getting hit hard this morning and there may be concerns in that group as well.

Earnings outside of financial stocks were not bullish either. Microsoft missed its earnings and it pre-announced before the open. They were slated to release earnings after the close. The software giant might cut up to 5000 jobs. They had EPS of $.47 when $.49 was expected. EBay announced its first year of declining revenues. Sony said it could lose close to $3 billion for the year.

Not all of the news is negative. AAPL, IBM, BNI, ABT and NTRS have posted solid numbers. IBM’s earnings release fueled the rally Wednesday and any positive earnings news will go a long way since worst-case scenarios are priced in. After the close we will hear from Google and that will shed light on advertising revenues. Intuitive Surgical will indicate how willing hospitals are to invest in medical equipment. Capital One will give us an idea of how quickly credit card defaults are rising. Tomorrow morning, General Electric will release earnings and we will be able to gauge global capital expenditures.

Next week there will be many economic releases. LEI, consumer confidence, durable goods, initial jobless claims, GDP and Chicago PMI top the list. In every case, the consensus estimates are lower than the prior month. The market is pricing in bad news. Not included in my list is the FOMC meeting. Their target is already at 0% and they are out of bullets. There’s not much more they can say that will impact the market.

The earnings releases will be fast and furious. By the end of the week we will have a good feel for every sector and group. Profits and guidance will determine the market’s direction. We will need excellent numbers to fuel this market 10% higher in the next week. That would get us back to the December 31st close. In the last 59 years, as January goes, so goes the year. This indicator is 91% reliable and has only failed five times since 1950. The market is below key horizontal support and I don’t believe will make it.

Too many issues need to be resolved and a meaningful rally won’t materialize until the financial sector stabilizes. The market is near long-term support and the implied volatilities are on the rise again. I feel comfortable selling naked puts on strong stocks with good technical support.

The advance /decline is a negative 1:5 and there is a greater chance for a drift lower this afternoon than there is for a bounce. 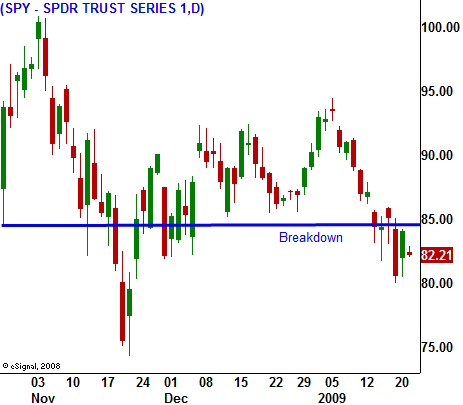