Support Is Holding and the Market Is Treading Water – Sell OTM Put Spreads!

Yesterday, the market was able to ward off early selling that resulted from weak earnings and economic data. Microsoft released its earnings prematurely and they missed their EPS by two cents. PC sales were much weaker than expected and that weighed on the results. Initial jobless claims came out much higher than expected and they stand at the highest level since 1982. In the face of such negative news, the market was able to pare losses by the close.

Today, we are seeing a similar pattern. The market opened on a very weak note when General Electric announced a 44% decline in earnings. Capital One also missed their number and credit card companies are feeling the pinch. At midday, the S&P 500 futures have rallied back 20 points and we are almost at breakeven for the day.

Regional Banks were strong relative to their larger counterparts before this week. Now the credit crisis has spread and they are taking huge write-downs. The will be lining up for TARP money with the big boys. Analysts believe that Bank of America and Citigroup might collectively need $150 billion in federal aid to shore up their balance sheets.

The government is not running out of ways to spend money. It’s projected that we will need to raise $1.75 trillion to fund all of our initiatives. That represents 12% of our GDP and it is twice as high as the prior high in the early 1980s. If the demand for our bonds falters, this master plan will fail. Germany could not place a mere $6 billion bond offering two weeks ago. The soon-to-be Treasury Secretary has accused China of manipulating its currency. Picking a fight with them when we want them purchase more of our debt is not a good idea. They have kept their currency low, but they are also buying a major portion of our debt.

The financial sector only represents 10% of the S&P 500 and further declines in those stocks won’t dramatically weigh on market performance. However, we need stability in the financial sector so that lending practices can resume. Businesses and consumers can’t drive the economy without credit.

Next week, we will have an onslaught of economic and earnings releases. Now that the financials are largely out of the way, we can see how other sectors are performing.

For today, the market seems like it will be able to tread water. It has reversed early declines the last two days and support is forming. The advance/decline line has improved today and it is grinding it way back to even. I am ramping up my put sales on stocks that I like. By the end of the day, I will have about 25% of my desired exposure. 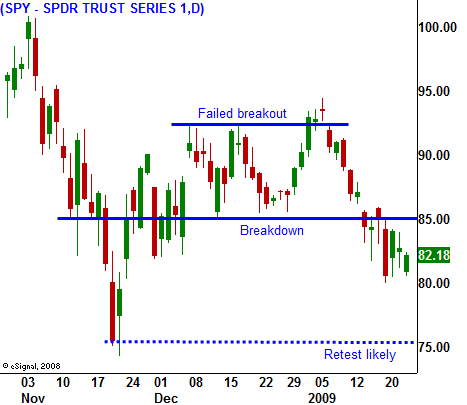