The “Silver Bullets” Are Gone – Get Ready For The Next Leg Down!

The market has nothing to look forward to so sellers are in complete control. Interest rates are at 0%, the financial bailout has been outlined and the stimulus plan has been approved. All of the “silver bullets” have been fired and there is nothing else that can be done. Any additional stimulus will not be well received.

The current stimulus package has already come under tough scrutiny. Analysts don’t believe that it will generate employment or save 9 million jobs. Our national debt spirals out of control and we don’t even know if we can raise enough money to satisfy our current plans. The treasury will need to raise $2 trillion this year.

Financial stocks have been crushed this week. The selling started in Europe on fears that an Eastern European country could suffer a financial collapse. This event would shake the foundation of European banks, most of which are already on the ropes. The ripple effect could be devastating. US banks tumbled on the possibility of nationalization. In that situation, equity holders would lose everything. The other concern is that the government would inefficiently manage operations.

There are a few positives for bank nationalization. First of all, the toxic assets could be unloaded to private equity investors. They are willing to buy the securities but the banks don’t want to sell them. If they do, their portfolios will be marked down dramatically. Banks are waiting to see if the Fed has a better bid and they hope for the formation of a “bad bank” for toxic assets. These assets are overvalued and the banks will ultimately suffer huge losses one way or the other. If the banks are nationalized, at least taxpayers have a chance of making some money when the economy rebounds. Once the banks are stable, the government can take them public.

The unemployment rate continues to escalate and default rates on every type of loan are climbing. Businesses are also finding it difficult to roll over debt and the cost of capital is rising. The key to any turnaround lies within the banking system. This needs to be stabilized before any improvement can be expected.

Earnings season is coming to a close and the results have been miserable. For the handful of companies that have not lowered 2009 guidance, they have pushed all of their earnings back to Q3 and Q4. That smells of future warnings when conditions fail to improve. Next week, REITs, restaurants and retailers release earnings. Dismal results are expected and these companies are likely to deliver disappointing news.

This morning, the CPI rose .3% and it confirmed yesterday’s rise in the PPI. Transportation, healthcare and education were primarily responsible for the increase. I am hearing analysts say that inflation is a welcome sign because it means that we are not in any deflationary environment. I completely disagree. As the economy softens, consumers are hit by rising prices when they can’t afford them. An inflationary base will cause prices to explode when the government starts “printing money”.

As I stated earlier, the market has nothing to look forward to. Sellers are in control and the market is drifting down to 10 year support. It is one bad day away from a major breakdown. No one is in a hurry to buy stocks, but they will nibble on the way down. Bad news will continue to weigh on the market. That sets up a situation where we will drift lower for many months. Occasionally, we will see a sharp one-day rally where the shorts get squeezed. This will be a tough trading environment, but it is still possible to make money in it. You have to reduce your expectations and preserve capital.

Overall, I made money selling puts this month. However, in the last few days I have taken some hits and it didn’t make as much as I thought I would. However, being short puts when the market is heading down and still turning a profit is a testament to how well this strategy works. As the market establishes its next support level, I will continue to write naked puts on strong stocks.

For today, anything can happen on option expiration. My guess is that we’ve seen most of the fireworks and stocks will start to settle down. If they are close to a strike price, they will migrate in that direction. Next week, look for a new round of selling and a lack of buying, If SPY 75 fails, we will enter a new down leg.

Today I have included a monthly chart to demonstrate that there is no reason to get bullish. On a short term basis it feels like we have support, but a long term chart shows that the trend is still down. 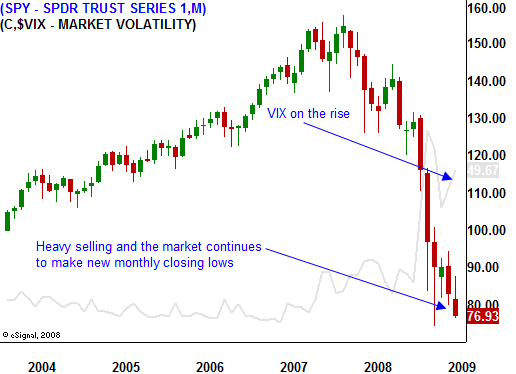