The Market Is Poised To Drift Lower Over The Next Few Months!

Yesterday, the market took a breather after a nasty decline on Tuesday. The bad news continues to mount and fear is rising.

In the last week, the government has outlined its plan for the financial bailout and the stimulus program. The financial rescue plan has provisions to purchase up to $500 billion in toxic assets. Surprisingly, private equity is ready and willing to make investments. Unfortunately, banks simply don’t want to take the hit and they are not parting with their holdings. They hope that the government will outbid private equity and they continue to hold on. The other part of the rescue plan will use $1 trillion to beef up bank balance sheets. The $800 billion stimulus plan includes $275 billion in mortgage relief. Some homeowners will have their principle reduced while others will benefit from a subsidized interest rate reduction. In total, the plan is expected to keep 9 million families in their homes.

All of the debate revolves around what’s fair. Our financial system is the fabric of our economy and banks went unchecked for many years. Horrible lending decisions created this mess and now we are all paying the price. Those of us who acted responsibly will pay the price. If the government steps in to bail out banks and homeowners, we will pay the price in the form of taxes. If they are allowed to fail, we will pay the price by way of an economic depression.

Unemployment is accelerating a dangerous pace. This morning, we learned that continuing unemployment claims rose to 5 million. In yesterday’s FOMC minutes, we learned that their projected unemployment rate for 2009 rose to 8.3%. As Americans lose their jobs, credit card defaults and foreclosures are spiking. In the last week, American Express and CapitalOne reported an alarming 40% increase in credit card defaults year-over-year.

Our government continues to make grandiose bailout and stimulus plans at a time when our national debt is at record levels. We will have to raise close to $2 trillion to fund the current programs and interest rates are already creeping higher. My fear is that the demand for US treasuries will hit a brick wall in the next 2 to 3 months. When that happens, the Fed has stated that they will purchase treasuries to keep interest rates down. This practice is known as printing money and it will destroy our long-standing status as the most stable currency in the world. Massive inflation will result and the dollar will get crushed. A declining economy and inflation are a lethal combination known as stagflation.

This morning, producer prices rose by .8%. With the dollar holding up relatively well and commodity prices dropping, I’m not sure where this number came from. For the time being, I hope it’s a miscalculation. If not, the cost of capital will start increasing immediately as inflation creeps in. Tomorrow’s CPI number will shed more light on this issue.

The Philly Fed index was as weak as I’ve ever seen and it gauges economic activity. The index came in at -41.3 when economists expected -25.0. This only strengthens the notion that conditions are dire.

Tuesday, much of the decline was related to fear in Europe. Analysts feel that Eastern European countries are on the verge of collapse. One failure could have a devastating ripple effect throughout the global banking system. The ECB is considering a contingency fund. At a time when each country is fighting for its own survival, that is unlikely.

We are through most of Q4 earnings and nine out of ten sectors have missed their numbers. The guidance has been weak and companies that have not reduced estimates have back-loading their earnings for the end of 2009.

Good news is very hard to come by. Credit spreads are narrowing and as I mentioned previously, private equity will take risk at the right price. The market is on a major support level that dates 10 years back and buyers have been nibbling on stocks. However, new money is not rushing into the market. Investors will buy when stocks decline to this level, but they will not chase. No one feels as though they will miss the next big rally.

Option implied volatilities are on the rise and put selling continues to be a viable strategy. The key is in your stock selection. Choose well and you will be handsomely rewarded.

I feel the market is poised for another leg down, but it won’t be dramatic. The nervous money has been washed out and an estimated $9 trillion sits on the sidelines. I believe that the market is setting up for a gradual drift lower over many months while it waits for signs of improvement. 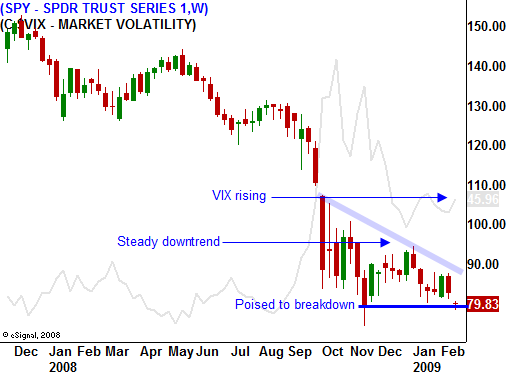