The Next Down Leg Is Starting – Look For Persistent Selling On Reduced Volume.

The market is continuing its slide from last week and it is poised to make a new 10-year low. News that the government was going to infuse more capital into ailing banks provided a small spark on the open. That buying quickly evaporated.

We already know that $1.5 trillion in aid will help shore up bank balance sheets. Those who need capital will relinquish equity and in some cases, nationalization is possible. Banks are in a very vulnerable state and one failure could have a domino effect. If the government does temporarily nationalize Citigroup and Bank of America, it could force the sale of toxic assets. Currently, banks don’t want to take the hit and they are holding out for a better price. They still believe that the possibility of a “bad bank” exists and they can unload their toxic assets at a higher price to the government. The private sector is bidding for these assets, but the banks won’t sell them.

Citigroup proposed to give the government a larger stake in exchange for capital. However, they wanted to convert the government’s preferred shares to common shares. This is a raw deal for taxpayers since the government would no longer be entitled to dividend payments and the preferred rights to equity would be reduced to that of common shareholders. These banks have little if any equity and private money is not going to flow into them. The government should stop pussyfooting around and take over the ones that won’t survive. Once they get rid of the toxic assets and open the books up for all to see, private equity will return. Then they can take the banks public.

As it stands, private equity is not going to step up to the plate when the government’s stake is unclear. Since Warren Buffett’s investment in Goldman Sachs months ago, we haven’t seen new equity flow into financial institutions. China and the Middle East have already taken huge hits and they are not going to throw good money after bad. Selling assets from the banks to private equity is as much as we can hope for.

In Europe, banks are in much worse shape. Their leverage is much higher and the ECB kept rates elevated much longer than we did. Fear that an Eastern European country might collapse has sparked panic selling. European banks are already on the ropes and this event could cause a number of them to fail. That in turn would send shockwaves around the world.

All of the “silver bullets” have been fired. Interest rates have been lowered to zero, the stimulus plan has been approved and the financial bailout has been outlined. Our national debt has escalated to an unprecedented level and we don’t even know if we can attract enough capital to finance what has already been planned for. From here out, time will have to take care of the rest.

This morning’s rally came on old news. We already know that the government has to infuse capital. The market quickly erased those gains and it wants to head lower. I will not start selling out of the money puts until I see signs of support. I made money last month, but much of the gains were stripped away in the last two days of trading. I have time to reevaluate and through the course of the week I will be watching to see which stocks hold up the best.

The momentum favors the downside and the decliners lead the advancers by a 3 to 1 ratio. Look for continued selling today. Earnings this week include retailers, restaurants and REITs. These are some of the weakest stocks and the news should be dismal. There are also a number of economic releases and they include durable goods, initial claims, GDP, Chicago PMI and consumer sentiment. The only positive the entire week is end-of-month buying and I do not believe that will be enough to keep us from selling off. Keep your powder dry and wait for support. 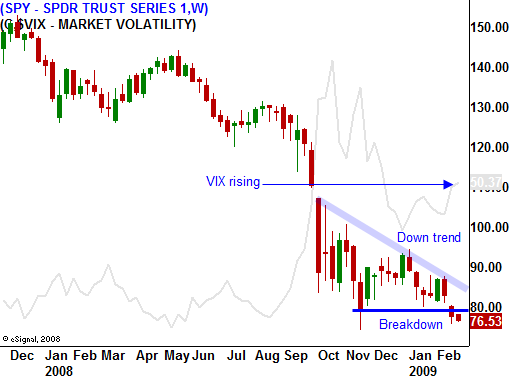