Yesterday’s rally should serve as a constant reminder that bear markets can produce big up moves. It resulted from a number of temporary conditions.

The market had fallen to a major support level and it was deeply oversold. Ahead of the President’s speech no one wanted to be short. Earnings and economic news was light and there wasn’t anything to keep a lid on the market. It was a one-day event and the market is testing the downside this morning.

Today, the Fed Chairman is testifying before a House committee. I’m getting tired of the finger-pointing and the same old question, “How did this happen?” It all boils down to lax lending laws, poor oversight, greed and a willingness to spend more than we make (from the government down to individual Americans). The question should be, “How do we fix this?”

The answer is relatively easy and it is a matter of severe pain now or devastating pain later. If we wanted to take our medicine now, the Fed needs to shore up the banking system and force the liquidation of toxic assets. We also need to let the chips fall where they may even if it means families will be forced out of their homes. The stimulus package last year and the one we just passed are a waste of money. The government needs to pull back our troops, cut defense spending and start increasing the eligible age for Social Security. Saving (not spending) is the solution. Unfortunately, this is never going to happen.

No elected official would last if they chose this path. Their legacy would be a reminder of great hardship. The easiest course is to keep spending money that we don’t have. Give tax rebates, help homeowners with their mortgages, give additional assistance to unemployed workers and increase health care. This is where we are headed. Our national debt has skyrocketed and we don’t know if we’ll be able to raise money at a reasonable cost of capital. We can prolong the agony, but future generations will suffer and the pain will be much greater. We are arrogant enough to feel that our status as the world’s most stable economy can never be challenged. As our debt levels escalate and our currency plunges, the US will lose its AAA credit rating. This will take a few years to play out, but eventually this will all catch up to us.

Protectionism will also hurt future trade between the countries that can help us the most. I heard the “buy American” theme a few times during last night’s speech and it scares me. China and Japan are in much better shape than we are and they will be the first to emerge from this credit crisis. As a country, we’ve spent all of our money and free trade with someone that has money can only help us.

Enough talk about politics and economics. The market is in a steep downtrend and it has very few positives. Banks lack transparency and the AIG debacle represents the potential downside. A $60 billion loss last quarter and a $100 billion loss last year indicate how severe the problem is. One has to wonder how deep the problems are with the other major financial institutions needing more capital. Earnings season has passed and the only thing that can get us out of this downward spiral is a decline in unemployment. When we get the first signs that unemployment is stabilizing, the market will mount a sustained rally. The Fed and the Treasury are powerless when it comes to the market. Time will pass and eventually, signs of an economic trough will show themselves. Until then, we can expect a gradual decline to new lows with an occasional big rally.

The unemployment rate has been climbing at an accelerated pace and I do not see improvement for many months. Tomorrow’s initial jobless claims number will raise concerns and continuing claims will likely move above the 5 million mark. GDP and durable goods orders are expected to be weak.

I am starting to sell out of the money puts on stocks I like. This is a time to be very selective and I need to see relative strength in my picks. I believe the market will hold support through this week and end-of-month fund buying will help. In the last few months, the Unemployment Report has actually trapped bears. Traders that shorted ahead of the number were squeezed. With that in mind, the damage could be contained next week. If support can hold through the Unemployment Report, I will aggressively start selling out of the money puts. Until then, I will only establish 25% of my desired position.

The market has stabilized this morning. We are still near major support and I don’t believe we will see a huge decline this afternoon. Prices are likely to stay in a choppy range today. 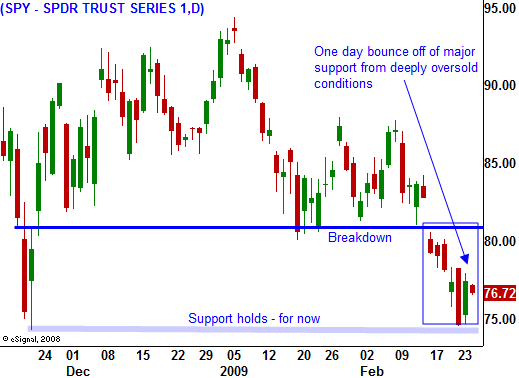