The President’s Budget, GDP and Durable Goods Are Weighing On The Market!

Yesterday’s early rally faded late in the day when traders learned the details of President Obama’s budget. It is projected to run a deficit of $1.75 trillion in 2009. That is 12.3% of GDP and it is twice as big as the previous high back in the early 1980s.

The concern is that the spending won’t stimulate the economy or create new jobs since it is heavily weighted towards social programs (healthcare, unemployment, education).

To finance more than $3 billion in spending, President Obama plans to raise the tax rate for people making more than $250,000 per year. The tax rate will rise from 34% to 39%. Capital gains taxes will also increase from 15% to 20%.

Corporations will not be left out of the mix. He will tax oil companies. This is particularly troublesome. First of all, energy prices are low and oil companies need to incentives to look for new reserves. If they know that all of their profits will be taxed away, they will not look for new oil. That means the supply will remain constant and any future supply disruption will cause prices to go higher. If the economy rebounds and demand increases, oil prices will shoot higher. Excessive taxes are already forcing other companies to move their operations overseas (Halliburton). Companies in other industries are wondering if they make “too much money” and if they will suffer similar consequences.

The President also plans to withdraw troops from the Middle East in 18 months. The wars in Iraq and Afghanistan are costing us $200 billion a year and we need to stop that bleeding with our troubles here at home. In two years, our war expenditures should decrease by $150 billion a year.

In aggregate, the market did not embrace the President’s plan. As soon as the details were released, the market reversed and closed on its lows. We currently sit at a 12-year low.

This morning, the GDP showed a decline of 6.2% when the decline of 5.4% was expected. Last month, when the government first forecasted economic activity from October through December, it pegged GDP at a 3.8% decline. This revised estimate shows that conditions are much worse than expected. Consumer spending accounts for two thirds of GDP and it dropped by 4.3%, the biggest decline since 1980. Exports declined by an annual rate of 23.6%, the worst since 1971. Business investment fell 21.1%, the largest drop since 1975. The conditions continue to deteriorate at an accelerated pace.

In Europe, a banking consortium raised $25 billion to help fund Eastern European banks. While this sounds like a lot of money, they have lent $1.7 trillion and many analysts believe that they will need a total of $200 billion to shore up balance sheets. This funding will help, but it is a far cry from what is needed. Two weeks ago, the market tanked on worries that an Eastern European Bank would fail and that it could have a cascading effect on other European banks. They are all in a weakened condition and one event could spell disaster. I doubt that the EU will be able to raise the necessary money with each country fighting its own battles.

Next week’s Unemployment Report will cast a dark cloud over the market. After yesterday’s horrible initial jobless claims number, worst-case scenarios will be built-in. Throughout most of 2008, shorting ahead of the unemployment number was very profitable. However, in the last two months, shorts have been squeezed and that play has run its course. I feel that we might drift lower ahead of the number and find support.

As bad as the news has been (Obama’s budget, durable goods, GDP, AIG, GM, Citigroup), the market has been holding up. The news will not get better for many months and until we see signs of improvement, a sustained rally will not materialize. By the same token, buyers are willing to nibble at stocks when they reach the low end of their trading range. I feel that the market will not make any major declines in the next few weeks. It is likely to gradually drift lower. Sellers are not aggressive and buyers are pulling their bids. If you’ve noticed, the volume is starting to dry up. This means that the declines are due to a lack of buying, as opposed to heavy selling.

Over the last few weeks, shorts have not wanted to head into the weekend with bearish positions because of pending news. Now that all of the bailouts, stimulus plans and budgets have been disclosed, they might feel more comfortable shorting into the weekend. The government doesn’t have any more rabbits to pull out of the hat. Consequently, today’s decline could gain traction in two the bell. Decliners outnumber advancers by 2:1 and we are just below critical support at SPY 75. I’m not looking for a dramatic move today.
I still feel comfortable selling naked puts. I am keeping my distance and I am slowly scaling in. 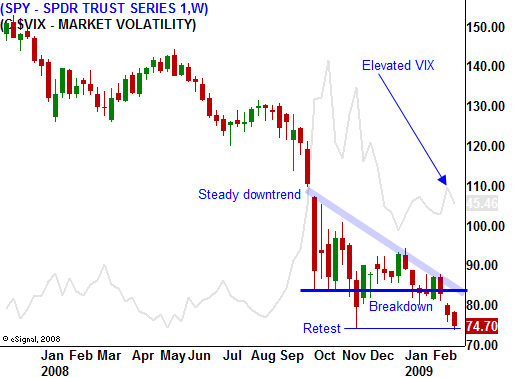