A Rebound From Early Weakness – Look For A Grind Higher This Afternoon!

After a miserable start to the month, the stock market has gained its footing. Bad news stretched from a fall in durable goods orders, to a downward revision in GDP, to an accelerating unemployment rate. During the darkest moment last Friday, stocks found a bid and by the close of trading the losses for the day had been erased.

China provided a glimmer of hope last week. They doubled their stimulus plan ($600 billion) and their Purchasing Managers Index (PMI) rose for the third consecutive month. Copper consumption is up and the metal is trading near a three-month high. Analysts are hoping that the third largest economy can pull the rest world out of this economic decline. Unlike the US, China can afford the stimulus package. It has a mountain of money (US dollars) and it is creating jobs. It is not sponsoring social welfare, it is building infrastructure to improve the nation’s productivity. Given the average hourly wage in China, this money will go a long way.

Tuesday, Citigroup announced that it made an operating profit of $8.3 billion this quarter. That does not include extraordinary items (write-downs) so we will see where the bottom line comes in. Banks are borrowing at 0% and lending out at 6% or more. This is an unprecedented spread and soon, financial institutions will start making money. It’s a matter of how long it will take robust profit margins to offset dramatic toxic asset losses.

This week, Congressional hearings are being held to discuss mark-to-market regulations. FASB, the SEC and the Fed are opposed to suspending the accounting rule, but all agree that changes need to be made to account for extraordinary conditions. Any relief will loosen bank credit and it will “grease the wheels”. As conditions improve, banks should be forced to sell their toxic assets. Once the balance sheets are cleaned up, the rule can be reinstated. These changes would not require one dime from taxpayers and it seems likely to happen. The Fed and the Treasury want banks to lend and this is one way to promote it.

As I’ve been stating, any chance for a sustained rally will have to come from the financial sector. Lines of credit will have to be restored so that businesses can resume normal operations.

Earnings next week would have been highlighted by investment banks and I would have been talking about Goldman Sachs, Lehman and Merrill Lynch. Now only one of the three remains and it leaves me with an empty feeling. We will get a look at Goldman’s numbers next week and they have a history of exceeding expectations. Good news could fuel financials. Last week, Northern Trust said that they want to return their TARP money. They are another strong financial institution and there are clearly pockets of strength.

From an economic standpoint, PPI, CPI, initial claims, LEI and Philly Fed round out the announcements next week. I don’t believe they will have much of an impact. This morning, we learned that retail sales declined by .1% and that was better than expected. Initial claims rose by 9,000, which was higher than expected. The unemployment rate continues to escalate and the market has been able to recover from early losses. Weak economic news has been discounted and it no longer weighs on the market. Last Friday we saw evidence that the market has compressed down to a support level when bears were not able to push prices lower. The unemployment rate spiked to 8.1% and it was much higher than expected.

The market needs to close above resistance at SPY 75 this week in order to keep this rally alive. If we can string a few bullish days together, the bears will have to respect the move. Short covering will spark the next rally and quadruple witching could have a positive bias next week. Conversely, if the market fails to penetrate resistance, it is likely to sink back and test the lows.

The one “fly in the ointment” that looms is an Eastern European bank failure. If that happens in the next month, the ripple effect could be devastating. If we can get through the next few months without that happening, improved financial conditions could help us shoulder that blow.

The market is very oversold and I am favoring a bear market rally at this juncture. On Tuesday, the advance/decline was a positive 12:1 and the up volume outpaced the down volume by 20:1. The depth of the rally was a positive sign. Today, the market has overcome early weakness and I believe it will grind higher into the close.

I still want to distance myself from the action and I am selling out of the money puts on strong stocks. I currently have 75% of my desired risk exposure and I will continue to add if we can close above SPY 75 this week. I would not be surprised to see a 100 point rally in the S&P 500 futures in the coming weeks.

I will play the move, but I am always mindful that we are in a bear market and that any rally simply represents a shorting opportunity once it stalls. 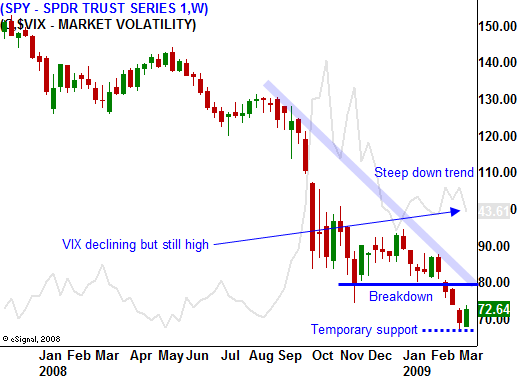