The Market Needs To Close Above SPY 75 This Week To Keep The Rally Alive!

Yesterday’s big rally charged higher right into the closing bell. The market bounced from a deeply oversold condition and shorts covered positions. This morning, the market is trying to follow through and it has been able to hang on to early gains.

This rally should be more than a one day wonder. Good fundamental news is creeping into the picture. Last week, China announced that it will double its stimulus plan. For the third straight month its PMI has increased. Commodity prices are on the rise and most analysts suspect that the demand is coming from China. Unfortunately, a naval skirmish is casting a dark cloud on US/Chinese trade talks this week. We need a solid relationship between our countries and Asia represents our best chance for a recovery.

Citigroup announced yesterday that they are showing an $8.3 billion operating profit so far this year. That news sparked financial stocks and many feel that the worst is behind us. Banks are borrowing at 0% and they are lending at 6% or more. This is one of the largest spreads ever seen and it should translate into big profits once this crisis passes.

Banks might also catch a break tomorrow if mark-to-market accounting rules are temporarily eliminated. This change will not cost taxpayers a dime to institute. If banks feel that their profit picture is improving and that they have sufficient reserves, they will start lending again. The Fed and the Treasury have “greased the wheels” and their actions should start bearing fruit in the next few months. As capital returns to the market, banks should be forced to liquidate toxic assets. Once they’ve done so, the mark-to-market rules can be re-established. They provide much needed transparency to the financial sector.

The news scene is very light this week and that will help this rally. I believe we need to convincingly close above SPY 75 this week to see a sustained rally. Shorts need to respect this rally and follow-through will force them to take profits. If we can get above this resistance level, it could spark buy programs during option expiration next week.

The advance/decline yesterday was 12:1 and the up volume outpaced down volume by 20:1. That is an encouraging sign. Bears have been trying to keep a lid on the market today. If they can’t push it down, we will see prices move higher into the closing bell.

Tomorrow, initial jobless claims in retail sales will weigh on the market early. Bad news is expected and the market should be able to recover from early weakness. If the mark-to-market rule changes are made, we will see a nice rally.

Never lose sight of the fact that we are in a bear market. This rally is nothing more than an oversold bounce. The unemployment rate continues to rise at an accelerated rate and the possibility of an Eastern European bank failure looms.

As I’ve been mentioning, selling naked puts on strong stocks with firm support is still the way to go. Don’t get overly aggressive. With all of the negative news, the market will rally higher in fits and spurts. It will not rocket higher so don’t feel that you will miss the next big rally.

If the market can’t sustain a rally this week, look for it to roll over and test the lows during quadruple witching next week. I do believe that there are enough positive signs to keep that level intact. 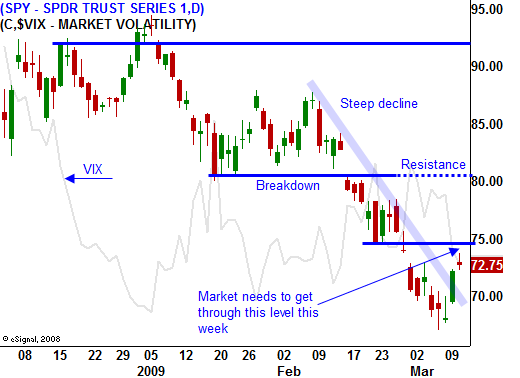