Big Breakout Above SPY 81 – Buy A Pullback Tomorrow Once Support Is Established!

Last week, the market started to show some signs of weakness. It had rallied more than 20% in three weeks and it had broken through resistance at SPY 81. By Friday, sellers started to step-up and a brief round of profit-taking set in.

There were plenty of reasons to sell. After stating that the first two months of the year had been very profitable, many banks said that March was a tough month. Analysts took a closer look at Citigroup’s profits and realized that most of it came from AIG payments that had been written off. The economic news has also been dismal.

Last week the market had to deal with durable goods orders and GDP. Both were extremely low, but those expectations were built into the market. Yesterday, ISM manufacturing increased 1.8% in February after a revised 3.5% drop in January. The market chooses to ignore January’s downward revision and it focused solely on February’s better-than-expected results. The ADP employment index showed a huge jump in unemployment. In the private sector, 742,000 jobs were lost. Analysts had expected a loss of 655,000 jobs. There was a bright spot in a separate report. Challenger, Gray and Christmas said that scheduled job losses fell 19.3% in March to 150,000. Employers do not plan to layoff as many workers and that might signal improvement in the coming months.

The market was able to get past these horrible economic reports and it closed on a positive note Wednesday. Clearly a bid has been established in the market and the pullback that we saw from last week’s highs was very small and very brief. This is particularly bullish given the disastrous Unemployment Report that lies ahead tomorrow.

This morning, initial jobless claims surged to a 26-year high. New applications for insurance benefits rose to a seasonally adjusted 669,000. Continuing claims are well above 5.5 million and Americans are struggling to find work. The sky rocketing unemployment rate has taken on a parabolic look. As the number of jobless Americans rises the base expands and eventually the rate of acceleration has to slow down. I am not going to construe that decreasing rate of change as bullish, but the market is likely to.

The biggest impetus today comes from FASB. They have agreed to make changes to mark-to-market accounting. That latitude will give financial institutions breathing room and they are likely to increase lending since their reserves will effectively rise. Unfortunately, banks will choose to hang on to toxic assets instead of selling them to raise cash. The financial sector seems to be on the mend. The actions from the Fed and Treasury have yet to play out, but the market is forward-looking.

In the last week I have been telling subscribers to take advantage of any pullback. It has been a great buying opportunity and the market quickly recovered. Shorts will be covering positions and we are poised for a nice bear market rally. Next week’s earnings and economic releases are very light and they won’t stand in the way. The breadth of the rally has been very strong and advancers led decliners today by 10:1. The volume has also been robust.

Tomorrow’s Unemployment Report will start our day with a cold splash of water. Any pullback should be bought since I believe the market will be able to recover throughout the day. Before you jump in, wait for signs of support. Traders will not want to go home short over the weekend given this week’s price action and breakout above SPY 81.

Remember, we are trading a bear market rally. Don’t chase prices. They will eventually come back to you. Also trade smaller size than you would on your bearish trades. This rally could last for a few months or at very least; we could stabilize within a trading range. Towards the end of summer I see trouble.

Many firms have not lowered their guidance and they have “back loaded” their fiscal earnings. That leaves the door open for profit warnings this fall. I also believe that the flood of US Treasuries will start to hit a saturation point in a few months. Interest rates will creep higher and the Fed will start buying debt (“printing money”). The long-term trend is down and that always needs to be in the back of your mind.

Retail and restaurant stocks are strong, be selective. Energy is also on the move, but focus on oil equipment stocks. Tech has been leading the market higher in their many opportunities there as well. The Daily Report will show you right where to look. Trade the stocks that are consistently making it to the top of the Live Update table. 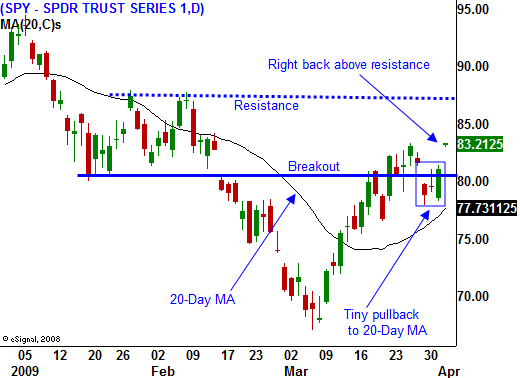