The Market Is Finding Support After A Bad ADP Number – FASB Will Help Tomorrow!

Yesterday, the market staged a nice rally for most of the day. However, by the close, the gains evaporated. That selling momentum carried over this morning ahead of the ADP employment index.

Private employers cut 742,000 jobs in March, much greater than the 655,000 jobs analysts had expected. In a separate report, US firms plan to layoff less people. Challenger, Gray & Christmas said that scheduled job losses fell 19.3% in March to 150,000. This is a positive sign. Friday’s Unemployment Report will show a huge jump in the unemployment, however, the rate of acceleration might begin to slow. If you look at a one-year chart of the unemployment rate, it has taken on a parabolic look. That pace can’t be sustained and once it slows, the market will see that as a positive sign.

As the number of unemployed Americans grows, it will be harder for that rate to continue to climb because the base is expanding. I am not construing this as a positive sign, but the market is likely to. Today, it has discounted the ADP report and prices have reversed from their early lows. The market is likely to look past Friday’s number given today’s reaction. In the last 4 months, the market has not declined on the actual release. If planned layoffs are on the decline, we might see initial jobless claims come in higher than expected tomorrow. That number won’t be reflected in Friday’s number, but it will show improvement.

The ISM manufacturing number showed a slight rise in factory activity. It came in at 36.3 versus 35.8 in February, slightly above expectations. This is still a very weak number, but it shows improvement at a time when auto production is at a standstill. Construction spending also came in better than expected, but it dropped by .9%. This is still the lowest level since March 2004.

The market staged a 20% rally in less than three weeks. It’s hard to imagine that it could be overbought after a year of bloodshed, but that is exactly what happened. Prices got ahead of themselves and they needed to pull back. We might still see weakness ahead of the Unemployment Report, but I believe SPY 75 will hold. That is a long-term support level that dates back more than six years. If this scenario unfolds, it will represent a higher low and that is bullish.

During the recent rally, the breath and volume were very strong. The actions taken by the Fed and Treasury are starting to take root and the market is forward-looking. We should see positive signs in the next few months and Asset Managers are anxious to allocate some of the $9 trillion that sits in cash on the sidelines.

Earnings season is a few weeks away and that will make or break this rally. I will be watching the guidance more closely than the actual earnings. If companies are slightly more optimistic, it will fuel this rally and shorts will run for cover.

Do not interpret my comments to be long-term bullish. I am simply positioning myself for a bear market rally. Once it runs its course, there will be excellent shorting opportunities. We have mortgaged our future and we still don’t know if we’ll be able to finance our grandiose plans. That piece of the puzzle won’t be known until late summer when the supply of new US Treasuries starts to hit a saturation point. Until then, we will trade for the long side and we will keep our distance. 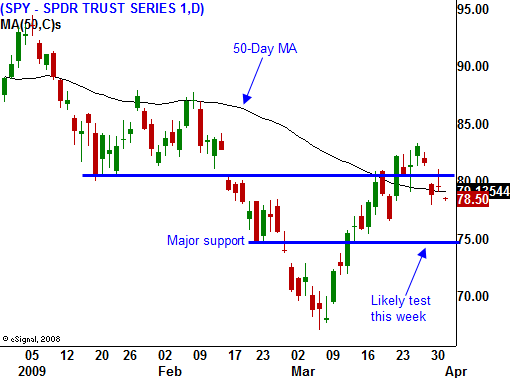