Market Holding Up Well – Look For A Late Day Rebound!

Yesterday, the market staged a massive rally after FASB relaxed mark-to-market accounting procedures. The SPY broke through resistance and it penetrated the 100-day moving average. As I’ve been saying, the economic news has not been good and today was no exception.

ISM services shrank for the sixth straight month and the index dropped to 40.8 from 41.6 in February. This was lower than analysts expected. The much-anticipated Unemployment Report showed an additional 663,000 job losses during March. After the horrendous ADP employment index showed 742,000 job losses on Wednesday, the market braced itself for the worst. The employment rate currently stands at 8.5% and January’s jobless number was actually much higher than first reported. The bulls are making a case that this is a lagging barometer and that conditions are improving.

When I dissect the durable goods orders, GDP, ISM manufacturing and ISM services numbers, I can’t make a case for this rally. The market is forward-looking and as long as traders believe that conditions are improving, the market will continue to rebound.

Buyers have established a bid and shorts are nervous. Early in the week, the market had an opportunity to reverse from extremely overbought conditions. The pullback came on light volume and it was extremely brief. Given the dismal economic news, we should have easily retested support SPY 75. The market made a much higher low and it briefly touched the 20-day moving average. During the remainder of the week, the bulls were clearly in control and the market rallied on strong volume and good breadth.

The earnings and economic releases are light next week. I believe that favors the bulls since they have the momentum. Holiday trading well set in towards the end of the week and shorts will not want to get “caught”. In fact, I don’t think they will want to go home short today and there is a chance for a late day bounce. I view this as a buying opportunity and I am selling out of the money put spreads today.

Railroads, oil equipment, specialty retail and restaurant groups look particularly strong and those are my favorite areas for put writing.

The next resistance level is at SPY 85 and I don’t feel that will be much of an obstacle. We could see a rally to SPY 92 ahead of earnings season if the momentum continues next week. A short squeeze will get us to that point.

Earnings season kicks off with the financials. Citigroup set the tone a few weeks ago when they said they were profitable the first two months of the year. That did not include write-downs. Most of those profits came from unexpected payments it received from AIG (it had already taken write-downs). They said March was not a particularly good month. They have $350 billion in toxic assets and they owe taxpayers $45 billion. It will take them a long time to claw their way out of this hole. In short, I believe good results are expected and the market is set up for a disappointment in the early going of earnings season. That event won’t play out until after April option expiration. Until then, I will maintain a bullish bias.

Remember that we are trading against the long-term downtrend and bullish trades need to be small. 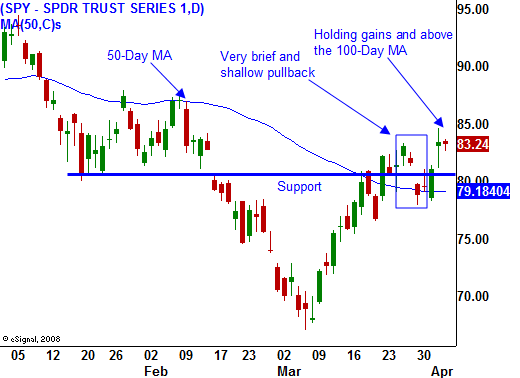