Buy The Dips – The Market Will Continue Higher!

The market has shown a great deal of strength the last two weeks. It rallied up to a major resistance level and it did not back down even when presented with bearish news events. A week ago, the threat of a swine flu pandemic was discounted and a horrible GDP number also failed to dampen spirits. That gave bulls the confidence they needed to continue buying.

Good news has been creeping in from many different sources. Monday, China posted its first PMI number over 50 in many months and that signifies economic growth. Chinese officials project that their economy will grow 7% in Q2. That news sent commodity stocks higher and our market was poised for a positive open Monday morning. Then, pending home sales were released and the number was much better than expected. The week started off with a nice rally and it continued to move higher.

One of the biggest market concerns has been the growing number of unemployed Americans. Yesterday, the ADP employment index beat estimates. In April, 491,000 jobs were lost compared to 708,000 jobs (revised downward from 742,000) in March. Unemployment is still on the rise, but at a slower pace. Challenger Gray & Christmas reported that planned layoffs declined 12% from 150,000 in March to 133,000 in April. This morning, initial jobless claims fell by 34,000 to a seasonally adjusted 601,000. These numbers suggest that the employment scene might start to stabilize.

Merchants reported retail sales numbers this morning and they were better than expected. Wal-Mart was the big winner and they reported a 5% increase in same-store sales. Warmer weather and tax refunds might have boosted sales for all of the retailers.

After the close, we will get the official results from the “stress test”. I’m not expecting any surprises since most of the news has already leaked out. Bank of America and Wells Fargo represent the majority of the money that needs to be raised. The market seems content with the news that has come out and this transparency will give bulls even more confidence.

Tomorrow, the Unemployment Report will be released. In the last four months, it has not weighed on the market even though the number has been pathetic. I expect bulls to find the silver lining and the market should rally after an early decline.

The market has been able to break through a major horizontal resistance level at SPY 92. The momentum has been very strong and this rally should continue even though other technical resistance levels are close by. In today’s chart you can see the downtrend line and the 200-day moving average. A close above SPY 93 will spark a great deal of short covering and that could come in the next day or two.

Option expiration is likely to have a very bullish bias since we are making new highs. If the market shows strength, option traders will leg out of hedged positions intraday and that will “goose” the market.

Interest rates are creeping higher and the Fed has stated that it will buy treasuries to keep rates low. This will crush the dollar. This morning, the Bank of England was expected to reduce interest rates and they did not. Their actions will also weigh on the dollar. As the dollar moves lower, commodity prices will move higher. The bullish news from China and a falling dollar both bode well for commodity stocks. I am selling puts in buying calls in this sector and the profits have come quickly. I believe this move still has room to run.

Be bullish, but be patient and take profits on the way up. 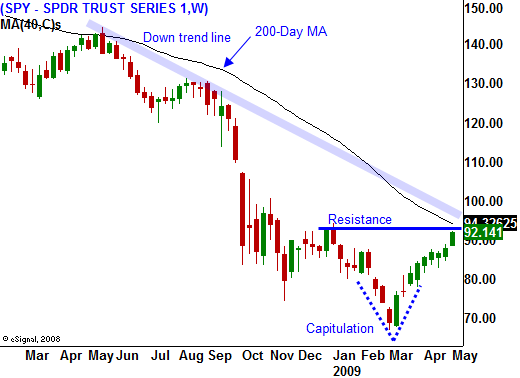