The Market Feels A Little Heavy – Bulls Will Try To Spark Short Covering Next Week!

The market has had a good run for the last two months and it has moved through a number of resistance levels. Earnings news has exceeded expectations and economic news is still bad, but there are signs of stabilization.

Wednesday, the ADP employment index came in better than analysts had expected. Yesterday, initial jobless claims increased less than expected and a report from Challenger, Gray and Christmas showed a 12% drop in planned layoffs from March to April. The table was set for a decent Unemployment Report today.

In the month of April, 539,000 jobs were lost. That was much better than the 610,000 analysts had expected. However, if you look inside the numbers, the government hired 60,000 census workers. That pretty much accounted for the difference. The unemployment rate rose to 8.9%, the highest level since 1983. Job losses in March were also revised upward by almost 35,000. We need to see the back month numbers being revised to show better employment conditions. Then, economists might get a sense that conditions are improving. Hourly wages increased by a penny, the smallest gain in three years. That is a concern because hourly wages had remained relatively high given the unemployment scene. It seems that hourly wages are finally starting to reflect true conditions.

The stress test results came in a little better than expected. Ten of the nation’s largest banks will need to raise $75 billion and most have already outlined plans to do so. Bank of America ($34 billion), Wells Fargo ($14 billion), GMAC ($11.5 billion) and Citigroup ($5.5 billion) account for more than 85% of the total.

Earnings releases are starting to taper off and most of the big companies have announced. Almost 70% of corporations have exceeded estimates and analysts are likely to revise Q2 numbers higher. They expected a 33% decline this quarter and they expect a 34% decline next quarter.

This was a week filled with major economic releases and by comparison, next week will quiet down. Retail sales will be released on Wednesday and that is perhaps the biggest number of the week. We’ll also get PPI and CPI, although they have been benign.

In short, there’s only one thing that can stand in the way of this market next week – interest rates. As the treasury starts funding the bailout and stimulus programs, they will issue new bonds. They will need to raise $2.3 trillion and the supply of new bonds will drive up interest rates. Yesterday’s 30-year auction did not go well and that is why I feel the market sold off.

Bulls have been able to find the silver lining in every economic release and the momentum favors the upside. Bears are running scared and if the SPY breaks above 93, we could see a major round of short covering. Next week, option expiration is likely to have a bullish bias since we are making new multi-month highs. Once we get that final surge, I believe it will be time to step aside and perhaps start selling OTM call spreads. Before I do that, I want to see the momentum stall.

Traders have not wanted to go home short on Friday and I believe we will see a decent rally today. Yesterday’s decline was minimized by a late seven-point S&P 500 rally near the closing bell.

Stay bullish, be patient and take profits along the way. If the SPY closes below 90, you should exit long positions. Commodity stocks are hot and that is where I am placing money. 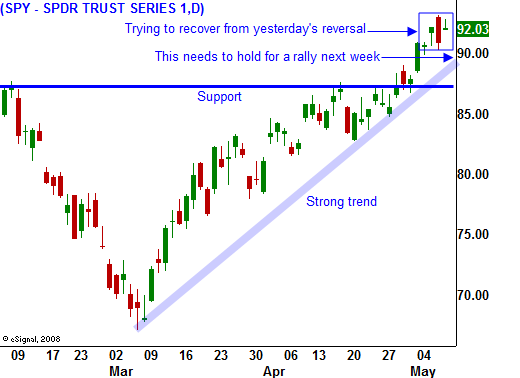