Bulls Need To Find A Catalyst Before Wed. To Force Short Covering!

Last week, the market continued to climb higher. The employment scene is deteriorating at a slower pace. The ADP employment index, a research report from Challenger, Gray & Christmas and the initial jobless claims number supported that notion. Friday’s Unemployment Report came in better than expected and only 539,000 jobs were lost. Analysts had expected a loss of 610,000 jobs. Unfortunately, the government accounted for most of that difference when it hired 60,000 new census workers.

We currently stand at the peak unemployment level that regulators used for the stress test. That does not give us much breathing room for “worst case scenarios”. Last week’s results were well received by the market and 10 banks need to raise $75 billion. Bank of America, Wells Fargo, GMAC and Citigroup account for more than 85% of the total. Over the weekend, we learned that U.S. Bancorp, Capital One, BB&T and KeyCorp are selling common stock to raise capital. Last week, Wells Fargo and Morgan Stanley sold a combined $13 billion worth of stock.

A financial collapse has been averted, but we are far from out of the woods. Banks have a deep hole to climb their way out. They have rallied sharply off of their lows and I do not believe they will fuel the next leg of the market rally. They still need to raise capital and that is dilutive to shareholders. That will keep a lid on these stocks for the next few months. The good news is that they should not be a drag on the market either.

The White House expects its budget deficit to come in $90 billion higher than expected (I’m shocked). New unemployment claims and corporate bailouts are to blame. This year, we will run a deficit close to $2 trillion and that is 13% of GDP. As a percentage of GDP, this is more than twice as high as the previous peak in our nation’s history. In 2010, we are projected to run a $1.25 trillion deficit. My guess is that unforeseen events will push that number higher as well.

As the treasury starts to finance the bailouts and stimulus plans, interest rates will creep higher. Last week, the 30-year bond auction did not go as well as expected and that caused the market decline on Thursday. Interest rates are the key number to watch over the course of the next month or two. The Fed intends to purchase $300 billion worth of US Treasury’s to keep interest rates low, but they will go through that quickly if there is upward pressure on interest rates.

This week is relatively light from an earnings and economic standpoint. All of the big companies have announced earnings and 70% of them have beat estimates. As they continue to release earnings this week, the market should respond in a positive manner. CPI, PPI, retail sales and initial claims are the big economic numbers of the week. If bulls can add to last week’s gains, they could force a serious round of short covering during option expiration week. The market feels tired and we need a spark to make that happen.

Tech stocks and financials seem to be running out of steam. If by chance the market can’t add to its gains, shorts will get more aggressive. They would like to push the market down and force latecomers out of the market. Sentiment indicators have been wildly overbought and one small reversal could generate a fast, considerable decline as speculators get washed out (I still believe SPY 87 will hold).

For today, profit-taking has set in and decliners outnumbered advancers by 3 to 1. We’re likely to drift lower the rest of the day. I would like to see a small rebound into the closing bell to indicate that buyers are still close at hand. As long as the market stays above SPY 90, I will maintain my bullish bias. If we break below that level, I will turn neutral (as long as we stay above SPY 85). This is a great time to take partial profits on your long positions. 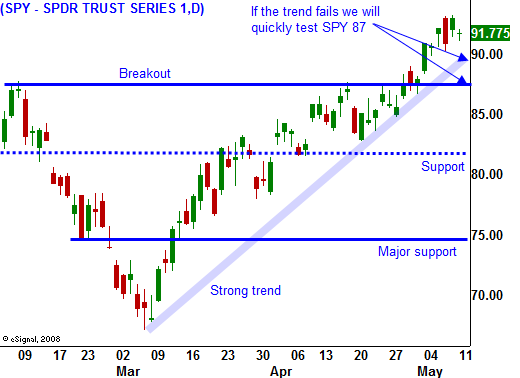