Profit Taking Has Set In and Bears Have The Ball – Sell OTM Call Spreads!

Yesterday, the market declined most of the day and it was not able to rebound into the close. After a brief opening bounce, prices have continued to deteriorate today and bears have temporarily regained control.

There really isn’t any bad news to justify the selling and that means buyers are tired. Profit-taking has set in and there aren’t any catalysts to drive prices higher. Bullish sentiment is off the charts and that is bearish from a contrarian standpoint. The market needs to work off some of this “fluff” and shorts are taking advantage of multiple resistance levels that sit at SPY 94. Horizontal resistance, a downtrend line and the 200-day moving average were within striking distance last Friday.

Interest rates continue to inch higher as new bond auctions come to market. The Fed has already fired one third of its $300 billion treasury budget and it is less than a third of the way into its 6-month time frame. That means it is losing the battle and rates want to climb. I believe this is the biggest head wind for the market right now.

Technology stocks are tired and retail stocks have rolled over. Financial stocks have run their course and they are issuing shares of stock like crazy. Last week’s “stress test” restored a bit of confidence and banks have been able to raise capital. That is dilutive to shareholders and this sector will not provide any fuel for the market.

Earnings continue to dribble in, but most of this news has already been disseminated in the market. The results were better than expected and stocks responded.

On the economic front, this is a relatively light week. Retail sales will be posted tomorrow and that could weigh on the market. Last month, analysts expected an increase after posting positive numbers in January and February. Retail sales dropped by 1.2% in March and with unemployment continuing to rise, I suspect consumers were cautious in April. The PPI and CPI should be benign and I don’t expect those numbers to impact the market.

Bulls needed to stage a rally yesterday or today. If they could have done so, a short covering rally would have ensued. That has failed to materialize and profit-taking will push the market lower during option expiration.

Decliners outnumber advancers by almost 3 to 1. I expect the market to decline into the close today. As I mentioned yesterday, I would get neutral if the SPY broke below 90. That looks likely to happen and you should exit long bullish positions. I also think it’s wise to take some profits on bullish put spreads. I am starting to sell out of the money call spreads on stocks that have stalled in the last few weeks. Retail and defense are two of my favorite areas.

So many speculators have rushed back into the market that a quick, sharp decline is likely. They need to be flushed out of their positions and I believe their selling could push the SPY down to 85 in the next two weeks. Manage your profits on your out of the money put spreads and sell some of the money call spreads. 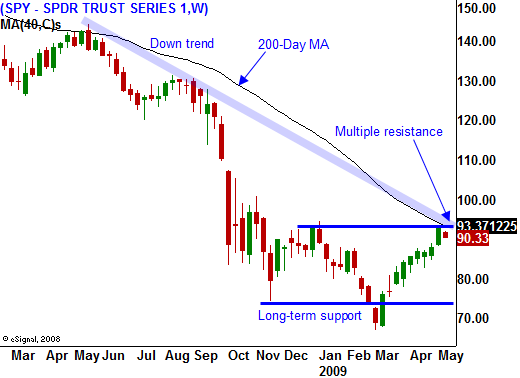