This Breakout Above Major Resistance Will Spark More Buying!

Last Friday, the market put in a rather lackluster day until last 15 minutes of trading. A huge buy program propelled the S&P 500 futures more than 10 points right into the closing bell. Traders didn’t want to go home short over the weekend and I suspect that some of the buying was speculative ahead of Asian economic releases.

China released its PMI number and it fell slightly to 53.1 from 53.5 in April. This marks the third straight month that it has been over 50, indicating economic expansion. The market liked this news and Asian stocks took off. The Chinese government will raise gasoline prices by 6% and that will hurt businesses and consumers. In Japan, wages fell 2.5% in April compared to a year ago. South Korea’s exports were down 28% in May, far below forecasts. All told, I do not believe the news was that encouraging.

With a positive backdrop, our market awaited economic releases. The ISM manufacturing index showed a slight rise in activity from 40.1 in April to 42.8 in May. A number below 50 still indicates economic contraction but it did come in better than economists expected. Construction spending rose .8% in April and that was the biggest surprise. Analysts were expecting a 1.3% decline. Furthermore, construction spending was revised upward in March. The market surged higher on the news and it has broken out above the 200-day moving average.

In today’s chart you can see the multiple resistance levels that I have referenced in the last few weeks. A long-term downtrend line, the 200-day moving average and horizontal resistance have all been breached. This move will spark a short covering. As you know, I have been looking for a short-term pullback and I’ve been wrong. The market wants to move higher.

As the week wears on, we need to see if shorts continue to cover and buyers continue to chase. I bought in the short legs of my call credit spreads and I am letting the long end run. Most of my positions still have three weeks of life so there is time for the positions to run before time decay becomes a concern. Retail stocks, utilities and defense stocks have been laggards and to a large degree, the losses are small. I am looking for another 2 to 3 day rally and then I will sell the long call positions. This breakout should gain momentum later today.

I still feel that trouble lies ahead after this week. The Unemployment Report will show that the job scene has not improved. On a week-to-week basis, initial jobless claims have been poor. The market will probably be able to shake this off short-term, but next week’s bond auctions will spook investors.

Commodity stocks are my favorite long at this juncture. Inflation will be a concern and these stocks continue to move higher as China buys more raw materials and as the Fed prints money.

I have missed the move during the last week and a half, but my positions are still profitable. I sold out of the money commodity stock put credit spreads early in the month and those have performed well. Today, I reeled in my short calls and if we get another 1-2 days of positive price action, those call positions will allow me to scratch and otherwise poor trade. The laggards are jumping during this rally as they catch up.

Shorts are running scared and under allocated Asset Managers are scrambling to place money. Advancers outnumber decliners by a 6 to 1 margin and I expect today’s rally to continue into the closing bell. Look for quick trades to the upside and take profits ahead of the Unemployment Report. The next big round of economic data will be released Wednesday and I don’t see anything standing in the way of this rally overnight. 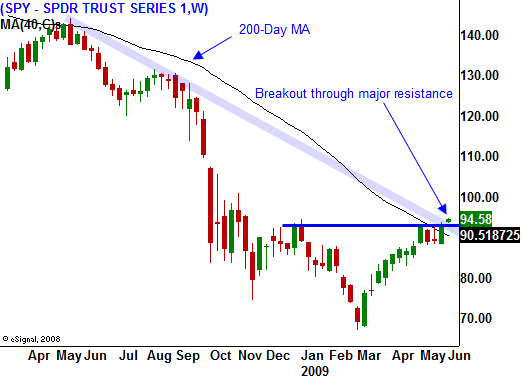