30-Year Bond Auction This Afternoon – It Should Keep The Market From Breaking Out!

Yesterday, I mentioned that the market action would be dictated by the ten-year bond auction. It did not go as well as planned and yields jumped to 3.99%. As that happened, the market declined. Later in the afternoon, the Fed released its Beige Book. It noted that 5 districts out of 12 had moderating conditions (activity was not deteriorating as fast as it had been). Credit conditions remained stable or weak and lending his tight.

The S&P 500 futures were down as much as 12 points after the bond action. However, in the last hour of trading, the market was able to recover most of the losses. A real tug-of-war has emerged between the bulls and the bears.

This morning, retail sales came in as expected and they rose .5%. Much of that increase was due to a jump in gasoline sales. If you strip out gasoline sales, retail sales were only up .2%. Initial jobless claims came in slightly better than expected and 601,000 new applicants filed for unemployment last week. The number of continuing claims (people staying on unemployment) rose to 6.82 million. All in all, the economic releases had a slightly bullish impact on the market.

In today’s chart you can see that a very narrow trading range has developed. I expect quiet trading until the results of the 30-year bond action are released this afternoon. If interest rates spike higher, the market will decline.

We are in a bit of a news vacuum. Earnings season has passed and the economic releases are relatively light. Next week we will get PPI, housing starts, capacity utilization, industrial production, CPI, initial claims, LEI and Philly Fed. In the absence of other news, the market will trade off of these numbers; however they have not typically generated big moves. The PPI and CPI have been benign. If they show signs of inflation, the market will have a negative reaction. Higher inflation translates into higher interest rates and that has become a focal point.

The market is near a breakout and one little push higher could spark option expiration buy programs next week. That in turn could fuel short covering and the next leg of the rally will unfold.

The market has been extremely resilient and it has shrugged off bad news. At this juncture, I don’t want to take any large positions until we have a bona-fide breakout or a breakdown. If the SPY closes below 93, I will start buying puts on defense stocks, REITs and gaming (leisure/entertainment) stocks. The option implied volatilities are dropping and buying strategies are once again viable. If the market breaks out to a new relative high, I will sell out of the money put spreads on commodity stocks. The Fed will keep buying treasuries (printing money) to artificially keep interest rates down and that will cause the dollar to fall. Commodity stocks will perform well in that environment and they should be strong relative to the market.

Be patient and wait for the market to breakout or breakdown. 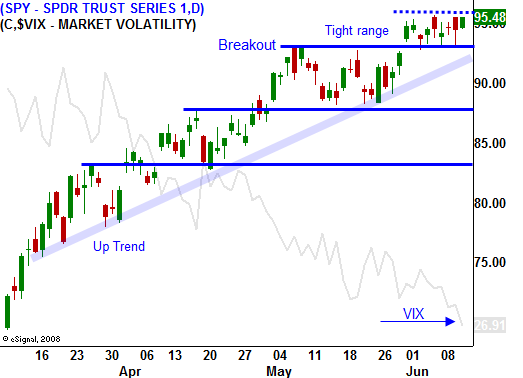