The Market Is Searching For Direction – Expect A Quiet Day!

The market has fallen into a very tight trading range. In today’s chart, you can see the back-and-forth action from SPY 93 – 95. Every time the market tries to sell off, buyers step in and a late day rally recovers the losses. The last two days, the market is tried to break out. Each time, sellers have pushed the market back below resistance.

Bulls have momentum on their side and they point to better-than-expected earnings last quarter. Over 70% of the companies beat earnings estimates. They also point to economic data that is improving from depths not seen in decades.

Bears argue that unemployment continues to rise albeit at a slower pace. People are out of work and continuing unemployment claims are at an all-time high. Debt levels are high and consumption (which comprises 70% of GDP) will not improve any time soon. The government is flooding the market with stimulus plans and bailouts without any regard for how these programs will be paid for. Our budget deficit has not reached this level since World War II.

The bottom line is that interest rates are on the rise. This week’s bond auctions went fairly well, but now they will be a focal point every other week. Traders will be gauging interest rate acceleration knowing that the Treasury needs to raise over a trillion dollars this year. In the last month, 30-year mortgage rates have risen by more than 1%. That will slow down any housing recovery.

In the Fed’s Beige Book that was released earlier in the week, tight credit conditions were seen nationwide. Banks have cut credit lines and consumers are watching their money. This week, retail sales showed a .5% increase, however the increase was only .2% when gasoline was stripped out.

Next week, there were plenty of economic releases, but none of them have typically been market “drivers”. There’s not much for traders to focus on and we are likely to see temporary moves off of these numbers. PPI and CPI have been benign and they have the potential to surprise. Today, we learned that US import prices rose 1.3% in May. If that spills over to the PPI and CPI, the market will have a negative reaction. Inflation, higher interest rates and a slowing economy are a lethal combination.

The recent market rally has been led by commodity stocks and a handful of tech stocks. The leadership has been very narrow and we need to see broad-based participation if a sustained rally is in the cards.

I still believe this is a bear market rally, but that does not mean that it can’t go higher. If we get a breakout, I will sell out of the money puts on commodity stocks and I will keep my distance. I would actually prefer this scenario because the higher we go the better the bearish trades will be when the market finally runs out of steam. If the market breaks down, I will scale into bearish put positions. Closes above 96 and below 93 on the SPY will be my trigger.

The market has tended to be positive on Fridays and Mondays. Consequently, I don’t believe we will see a big decline today. The early action has been negative and after yesterday’s reversal, prices should be soft today. Decliners led advancers by a two to one margin. The volume is light and this almost feels like holiday trading. Expect choppy action with a slight downward bias. This is a good time to line up your bullish/bearish trades. Be patient and wait for the breakout or breakdown. 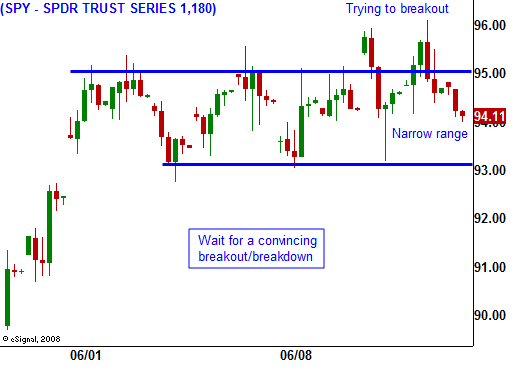