FOMC Watch – I Expect A Rally The Next 2 Days and Then A Decline!

Even though the market has broken key support, it’s still struggling to find momentum. Monday, we broke below horizontal support and it appears that the breakout to new relative highs a few weeks ago was a head fake. Failed breakouts often produce sharp reversals as traders that were sucked in – bail out.

Yesterday, the market was not able to follow through on Monday’s decline. Traders are waiting to hear from the FOMC this afternoon. The Fed has gone to extreme measures (printing money, buying mortgages) to keep interest rates low and there is no way in heck they are going to talk about raising rates in the future. In fact, they are likely to talk about additional quantitative easing to keep rates low. Last night, the ECB paved this road by offering banks a one-year, 1% loan. European banks jumped on the offer and the stocks are rallying.

The reaction to the FOMC’s statements is likely to be bullish. However, that rally should be short-lived. Most traders expect the Fed to be accommodative and even the smallest fall off in their rhetoric would be bearish. The real issue is the Fed’s inability to control interest rates. All of their actions thus far have not been able to keep a lid on rates.

The stimulus and bailout plans have created a $2 trillion budget deficit this year. The Treasury MUST issue new bonds to finance the debt and as the supply hits the market, yields move higher. Investors are demanding higher and higher rates of return and the bond auctions will continue well into the future. Every other week, bulls will be dodging bullets. This week, the Treasury is holding a record $104 billion auction.

This morning, durable goods rose 1.8% (much better than expected). While that’s better than a negative number, it is still far from good. Over the last year, the base number has been driven so low that large percentage gains are still needed month after month to get us back to where we were a year ago. Business spending jumped 4.8% and that is critical to an economic recovery. Keep in mind that business expenditures have been down 20+ percent in previous months.

Tomorrow, we will get initial jobless claims and Q1 GDP. Last week, continuing jobless claims decreased (the first time in 19 months) and if we see that for a second consecutive week, the market will have a bullish reaction. This is the final revision to Q1 GDP and I’m not expecting any surprises or fireworks after the number. We are also approaching end of the quarter window dressing. Asset Managers will not want to appear under allocated and I feel there might be some buying pressure. Once these bullish influences pass, I believe the market will resume its decline.

The financial disaster has been avoided, but now we have the cleanup to deal with. We will be paying for this for many generations. If you combine our national debt ($12 trillion) with our nation’s future obligations (Social Security, Medicare) our total debt is close to $56 trillion. That is approximately $500,000 for every American. I doubt that any bank would lend the average family of four $2 million and I question how long other countries will continue to finance our lifestyle. This dire situation does not have to play out overnight, but it will be resolved in the next 5-10 years.

For now, we will follow the technical breakdown. The market should be able to find support the next 2 to 3 days and then I believe we will see another decline. Take advantage of this rally and scale into put positions. Retail, restaurants and defense are my favorite plays at this time. If by chance the market closes above SPY 93, stop out your put positions. 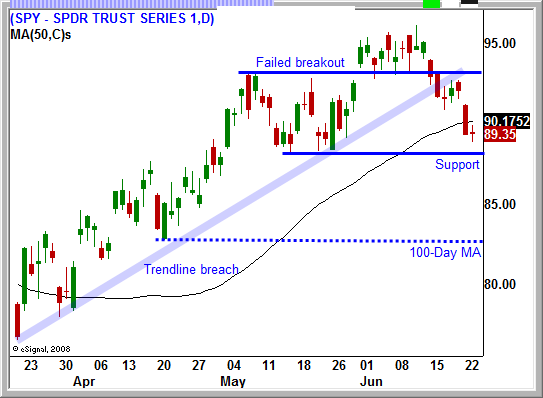