Look For Strength Today and Friday and Weakness Ahead of the Unemployment Report.

The market is still searching for direction. Yesterday, better-than-expected durable goods orders got things going. Analysts were expecting a drop and orders increased 1.8%. This is encouraging; however the base number is so low that many months of big gains will be needed to get us back to a reasonable level of activity.

The Fed stated that it will keep its interest-rate policy unchanged. It will not engage in “quantitative easing” past its September deadline. From my perspective, this is good news. They were effectively printing money and that was putting downward pressure on the dollar. Furthermore, their actions were not keeping interest rates down. The Fed also said that inflation is contained.

Employment is the key to any economic recovery. Consumption makes up 70% of our GDP and people will not spend money if they feel their job is in jeopardy. This morning, the final revision to Q1 GDP was posted. It improved slightly from earlier estimates, but Q! GDP was still down by 5.5%.

As I stated yesterday, I felt the market might rally into Friday. Durable goods, the FOMC and end of quarter “window dressing” would provide a positive backdrop. As we get into next week, I expect to see another down leg.

In today’s chart you can see that horizontal support has been breached. The uptrend line that dates back to March has also been broken. Bears have inflicted technical damage and the momentum will favor the downside.

I am gradually scaling into short positions. The market has traded to the plus and minus side today and it can’t get anything going. Advancers outnumber decliners by 2 to 1 and bulls will try to rally the market. There is a seven-year note auction this afternoon. So far, the three-year and five-year auctions have been well received this week and that has been bullish for the market. However, the long end of the yield curve seems most vulnerable. Watch the bond auction results today. If yields are steady, the market will rally. If yields rise, we could see late date selling. 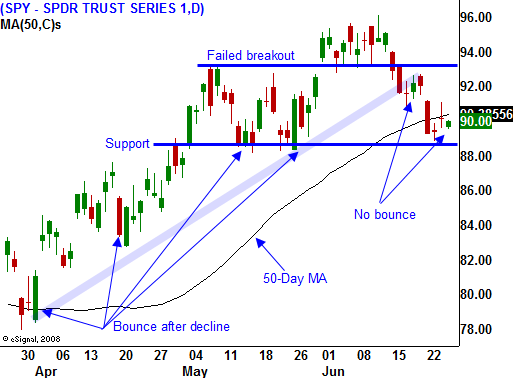