Start Scaling Into Put Positions. A Decline Is On The Horizon!

Yesterday, the market broke major support and it closed on its low of the day. For the last few weeks, we have been caught in a very tight trading range and one way or the other, a winner would emerge. Bears now have the upper hand and serious technical damage has been done.

As you can see in today’s chart, the breakout above SPY 94 has failed. That’s important because it sucked bullish latecomers into the market. Now that we have broken support, they will be bailing out of their positions. Profit-taking will also set in after a 40% rally from the March lows. I believe we could see a quick pullback to SPY 84. That is the 100-day moving average and I believe it will be a resting point for this first leg down.

As I’ve been stating for weeks, the market has run out of “drivers”. Financial stocks have stalled and a ton of new stock has been issued. This sector will do well just to tread water. Retail stocks also bounced from their lows and business conditions have not improved enough for them to run higher. Transportation stocks are weak and the guidance (FedEx last week) has been dismal. Commodity stocks have staged a big rally, but they have rolled over. China was buying commodities to diversify away from the US dollar. They weren’t using the commodities, they were stock piling them. Interest rates are climbing and the housing market will continue to slump. As I look across every sector, I am hard-pressed to find a current growth story.

Stock valuations were cheap in March because a possible financial collapse was priced in. That scenario has been averted and the market rallied on that news alone. We have reached a point where stocks are fully valued.

Over 70% of all companies exceeded earnings expectations last quarter. Good news is priced in and traders are expecting decent results this quarter.

The focus has clearly shifted to interest rates. This massive mountain of debt will have to be financed and the Treasury will be issuing bonds like crazy. Russia and China have already stated that they want to diversify away from the US dollar. More than half of our debt will have to be financed by foreign investors. New bond actions will be held every other week and those results will be scrutinized. During the next three days, the Treasury will hold a record $104 billion auction. I believe rates will jump higher and that has the market nervous.

Tomorrow, the FOMC will release its statement. Everyone is expecting the Fed to remain accommodative and that it will do what it can to keep interest rates low. Unfortunately, their quantitative easing and mortgage purchase plans have not worked out. Interest rates are climbing and there is nothing the Fed can do about it. The market knows that the Treasury has to keep issuing more bonds to pay for our debt.

I have not bought into the theory that China will pull the US, England, Germany, South Korea, Japan and every other major economic powerhouse out of a recession. More than one third of China’s GDP comes from exports and that activity will not materialize. If China over produces, it will be burdened with high inventory levels.

In the US, 70% of our GDP is derived from consumption. High debt levels, falling home prices, unemployment, higher interest rates, higher taxes and underfunded retirement accounts will keep spending in check. Americans will shift from “shop till you drop” to “save to the grave”.

As I have been stating, this three-month bounce was nothing more than a bear market rally. I will trade the downside more aggressively than I trade the upside because we are in a long-term downtrend. Now everyone can see the technical damage and I expect the selling pressure to increase over the next 1 to 2 months.

Tomorrow, durable goods orders will be released and they are likely to generate a small bounce. They beat expectations last month and they could do so again. The reaction to the FOMC statement should also be positive. I am expecting the market to decline today and to stabilize the rest of the week. Initial jobless claims and the final revision to Q1 GDP should lend support to the market. This is the end of the quarter and window dressing could also generate a small amount of buying.

I am buying puts today and I will scale into new positions as the week unfolds. The 3-month rally was strong and in the early stages of this decline, you should expect some bullish price action. Make sure to scale into positions and sell into the spikes. As the Unemployment Report approaches next week, I expect to see nervous trading. 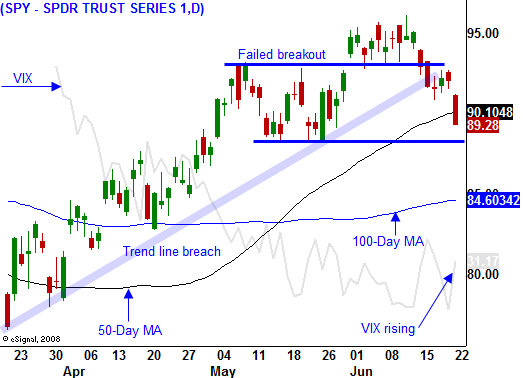