The Market Opens On It’s Low and Closes On Its High – Bullish Pattern!

The market continues to move higher and bears are on the defensive. Now they have to prove their case. Asset Managers are scrambling to place money and those who are under-allocated are getting more aggressive as they buy every little pullback. Each day, the market opens on its low and it closes near its high of the day. That is very bullish price action.

We have broken out above the neckline of an inverted head and shoulders formation (one-year chart), we have rallied above a one-year down trend line and the 200-day moving average was successfully tested. The momentum clearly favors the bulls and in quiet trading, the path of least resistance is higher. Bears have been declawed and they dare not stand in the way of this freight train.

By the end of the week, 85% of the companies in the S&P 500 will have reported earnings. Almost 3/4 of them have beaten earnings estimates. Analysts were expecting profits to decline by 35% and they are only down 29%. As the year progresses, the comparatives will be easier to beat and in Q4, we are likely to see a massive earnings increase. Corporations have been quick to trim expenses and any uptick in demand will go right to the bottom line.

Economic news has been well received and even when it misses estimates, bulls have been able to find the silver lining. Conditions don’t even have to improve; they just need to deteriorate at a slower pace to preserve investor confidence. Many economic indicators are bouncing off of the lowest levels we have seen in decades.

Today, factory orders rose more than expected and ISM services declined more than expected. The difference in both cases was minimal. The ADP employment index showed that employers cut 371,000 jobs last month. That would normally seem bearish, but it is an improvement from the 463,000 jobs that were cut in June. Initial jobless claims have been improving over the course of the last month and I believe Friday’s Unemployment Report will be well received. The consensus is for a drop of 328,000 jobs. Last month, 460,000 jobs were lost. Even if nonfarm payrolls drop by 370,000 (worse than expected), I think the market will look past the miss and focus on the “less bad” aspect of the number.

Next week, the economic numbers are rather dull and I expect trading to slow down. Retail sales will be released on Thursday and they will be the highlight. I believe the numbers will be light and consumers are not ready to open up their wallets yet. The market has been able to shrug off this number in the past and is likely to do so again with the notion that conditions are improving. The only “fly in the ointment” is interest rates and the Treasury will be issuing longer-term bonds throughout the week. These have not attracted the same demand as shorter-term maturities and we could see interest rates tick higher. That would not be good for the market.

Before I conclude, I should mention that I am not long-term bullish. Our debt levels span from the government, to the states, to municipalities, to individuals. The government has infused massive amounts of capital into our banking system and our economy to keep it treading water. This crisis will take years to resolve. When the stimulus ends the catalyst will be gone. Until then, I will follow the momentum and I will trade from the long side – cautiously.

I am selling put credit spreads on solid companies that have reported earnings and have top line growth. I want to make sure there is support between the strike price and the current price of the stock. As long as the SPY stays above 96, I will maintain this approach. Many sectors are just starting to recover and there are great opportunities.

For today, I expect the market to be able to pare early losses. 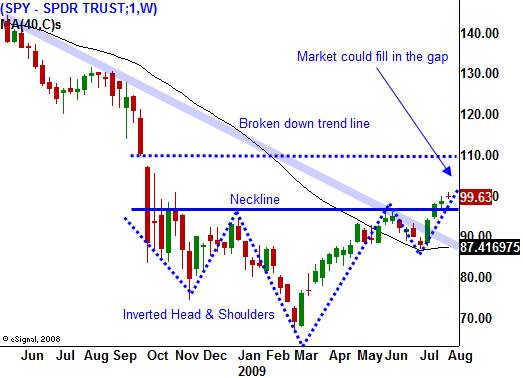