Stay Bullish – Be Cautious! The Market Is Due For A Pullback.

The market took a small breather on Wednesday and that is to be expected after a huge run-up. This morning, prices have firmed up and we are looking at a positive open. That is rather surprising given some of the negative news.

After the close, Cisco announced better-than-expected earnings. However, they forecasted revenue declines of 15% to 17% next quarter. Furthermore, the CEO said that he questions and economic recovery this year. The Chinese market declined 2% overnight. It has been the catalyst behind much of this market rebound. Last week it had a 5% decline overnight and we might be seeing some signs of strain. The Bank of England increased its quantitative easing program by fifty billion pounds. That means they are buying their own debt to keep interest rates artificially low. This was a surprise move and it indicates just how weak their economy is. The demand for their debt is waning and they may have reached a saturation point.

On the economic front, retailers have been falling short of already low estimates. More than half of the retailers that have posted July sales have missed their number. Consumers continue to cut back on discretionary spending. Initial jobless claims dropped by 38,000 and that was slightly better than expected. Unfortunately, that improvement was negated by a rise of 69,000 in continuing unemployment claims. This economic number did not generate much of a market reaction.

I am a little surprised to see the market up this morning and the downside is likely to get tested sometime throughout the day. All eyes are on tomorrow’s Unemployment Report. Analysts are expecting the unemployment rate to rise to 9.7% and they are looking for a decline of 328,000 jobs. That would be a vast improvement from the 467,000 jobs lost in June. Bulls have been focusing on the “less bad” theme and this would clearly be an improvement. The ADP employment index was worse than expected and the Briefing.com forecast is for 370,000 job losses. This leads me to believe there might be room for disappointment. In any case, if we do get a market pullback is likely to be met with buying next week.

The market is overbought and it is vulnerable. Sooner or later, some of the bullish sentiment will get flushed out and the decline will reveal the appetite for stocks at a lower level. Asset Managers have been waiting for a pullback and I sense that the market won’t drop much before it finds support.

There are two potential issues next week. Retail sales will be released on Thursday. As I mentioned earlier, companies that have released July revenues have missed low-ball estimates. Poor results could weigh on the market. Next week, we will also have long-term bond auctions. The appetite for short-term debt has been good and interest rates have stayed low. There is less demand for longer maturities and those yields could rise. That would be another negative for the market.

The momentum has been very strong and at worst, the market could pull back to SPY 96 as it tests the breakout. Earnings have been much better than expected, interest rates are in check and economic numbers are “less bad”. These themes pushed the market higher and they should remain intact the rest of the month. As the summer winds down, trading volume will fall off. That should favor the upward momentum and bears will not stand in front of this freight train.

Keep in mind that I am not long term bullish. I am just prepared to ride this wave as long as it lasts.

As I’ve been saying, stay bullish and be cautious. I am keeping a safe distance by selling put spreads on strong stocks with good earnings and defined support. As long as the SPY stays above 96, I will continue to use this approach.

Look for choppy action ahead of the Unemployment Report. There is enough negative news for the market to test the downside today but I am not looking for a major move either way. 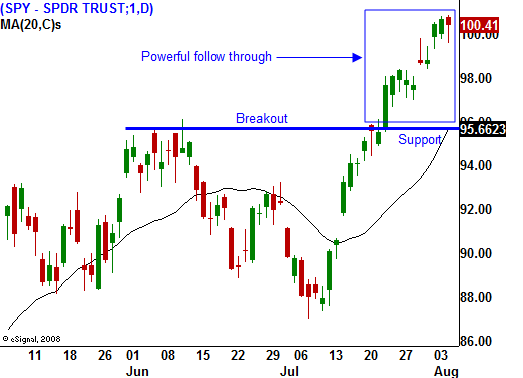