Big News Next Week – Be Patient – Wait For Dips!

The market is very resilient and yesterday it reversed early losses. Once again, bears were punished and the market closed near its high on light volume.

GDP and initial claims came in as expected and that news was not bad enough to justify the decline. It looked like profit taking was the culprit.

The bond auctions this week have gone well and interest rates are low. That is good for equities since it keeps the cost of capital low. Low yields also force investors to look for better potential returns in the stock market.

This morning, Intel raised its third-quarter outlook. Originally it had forecasted revenues from $8.1 to $8.9 billion. Now it expects revenues to range from $8.82 – $9.2 billion. Dell also released better-than-expected earnings. Although commercial sales are weak, consumers are upgrading their computers. Similar to what Hewlett-Packard had to say two weeks ago, they are seeing improvement and they expect the second half of the year to be better if trends continue. This news will bode well for tech stocks.

Earnings season is over and Congress is not in session. That means the market will rely heavily on economic releases for new information. Next week, there will be a ton of information to sort through. From my perspective, the highlights will be the FOMC minutes, ISM services and The Unemployment Report. Traders will be looking for hints of Fed tightening and they won’t see any. In their last statement, the Fed said they are committed to keeping rates low. We know that Ben Bernanke will remain at the helm and that stance will not change. Last month, ISM services came in better than expected. This sector accounts for 80% of our economic activity and continued improvement would be bullish. The Unemployment Report was better-than-expected last month and traders are still content with “less bad”. This number worries me a bit because initial claims have been relatively high the last three weeks. Many analysts are calling for a double dip recession. With September (the weakest month for the market) looming, profit-taking could set in if employment conditions worsen.

Many Asset Managers are looking for a dip and they want to get long. Consequently, I believe that any decline we might see this fall will be contained. At worst, we retest SPY 96 and a year-end rally ensues from that level. If we don’t get a decline and economic numbers show gradual improvement, the market could simply grind higher the rest of the year in a very slow, orderly manner.

The easy money has been made and I prefer to distance myself from the action. I can make the case for higher stock prices and I can also justify a pullback from this level. As a result, I am selling out of the money put credit spreads. I only have 25% of my desired position on at this time. I only want to add on a market pullback that finds support.

For today, expect quiet trading. The initial rally has evaporated and the market is virtually unchanged. If anything, there is a chance for a late day rally. No one wants to go home short and end of month buying will kick in next week. With major news due out next week, keep your size small and be patient. 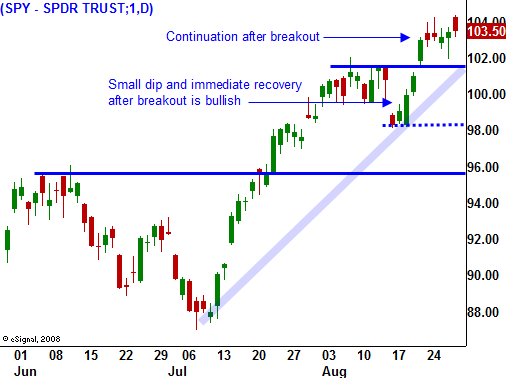