A Lack Of Buyers and Profit Taking Will Lead To Choppy Trading This Week!

Last week, the market showed signs of tiring. There were many positive developments and prices were not able to move higher.

Early last week, the reappointment of Ben Bernanke should have sparked a rally. He has guided us through the most difficult period since the Great Depression. Analysts and politicians have confidence in him and he has proven himself. A change at this fragile stage would have wreaked havoc.

New home sales came in better than expected, durable goods orders (helped by commercial aircraft orders) came in much better than predicted and Q2 GDP was unchanged when a decline was forecasted by analysts. Friday, Dell beat its number and Intel raised its revenue projections. /That news sparked a tech rally. Unfortunately, prices reversed and the early gains were erased.

The market has run up 50% from its March lows and volume has dropped off as the summer winds down. Bears are scared and they dare not short this market. The heavy feel has resulted from a lack of buyers and minor profit-taking, not short selling.

This morning, the Chicago PMI rose to 50. That was better than expected and we are on the brink of seeing economic expansion. As the week progresses, we will get a flood of economic data. Tomorrow, ISM manufacturing will be released. It has been improving and it should provide support.

Initial jobless claims have not improved much the last 3 weeks and that could be bad for Friday’s number. Last month, the unemployment rate dropped by .1% and if it rises back up to 9.5%, fears of a double dip could surface.

I do not believe we will see a major decline this fall even though September is traditionally a weak month. Asset Managers have waited to buy a dip during the last three months and they have not gotten an opportunity. That means they will aggressively place money heading into year-end. Interest rates are low, earnings will be very strong this fall because of weak comps and traders are satisfied with economic releases that are “less bad”. These are all bullish influences.

I don’t view the price action the last two weeks as bearish. There is an absence of buying and it’s natural to see some profit-taking after such a big rally.

End of month/beginning of the month fund buying and decent economic releases will provide support this week. Profit-taking and nervousness ahead of the Unemployment Report will offset that strength. Traders are also keeping an eye on China and their market was down 6% overnight. All told, I expect a choppy, light volume market that retests the breakout at SPY 101 this week. That level is not concern me if it fails. I am more interested in seeing SPY 98 hold. If we test that level and the market bounces off of it, I will sell out of the money put spreads on strong stocks. I currently have a small position and I don’t plan on adding unless I see that happen.

Keep your powder dry, good trading is just around the corner. 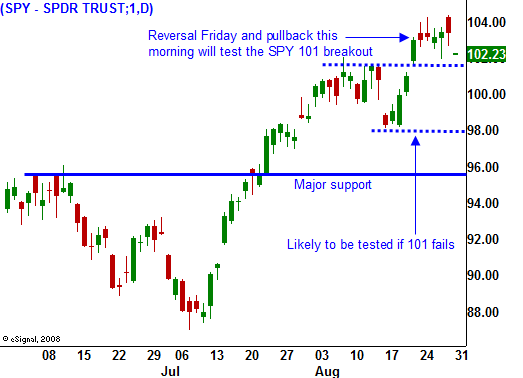