The Market Is Near Its High Of The Year and It Is Likely To Poke Through Next Week!

Trading has slowed down dramatically in September. Last week, nervousness ahead of the Unemployment Report prompted profit taking ahead of the number. As the week unfolded, the market gradually recovered. It now stands right where it was two weeks ago and it is within striking distance of a new relative high.

Bulls clearly have the upper hand and there are many positives working in their favor. Durable goods orders exceeded expectations, GDP was better than expected, ISM services and ISM manufacturing beat forecasts, and unemployment improved more than expected. Intel and other semiconductor manufacturers have raised guidance and that bodes well for tech stocks. Third-quarter comparatives are likely to show earnings growth since the recession started more than a year ago. The Fed is committed to keeping interest rates low and the bond auctions have gone well.

Earnings, interest rates and economic improvement will push this market higher. Bears point to historical weakness in September, but they have been declawed and they dare not step in front of this freight train. Many Asset Managers are under allocated and they are hoping for a decline so that they can place money in the stock market. That leads me to believe that we will not see much of a pullback.

The market has been searching for a “driver” and it has not been able to find one. Holiday trading has stripped down the volume and the momentum has stalled.

Today, initial jobless claims fell by 550,000. Analysts had expected a loss of 560,000 and the number was slightly better than expected. Continuing claims fell by 160,000 and that is encouraging. It hit its lowest level since April 4th. The market did not have much of a reaction and it is flat for the day.

Next week, there are a number of economic releases; none of them tend to be major market events. PPI, retail sales, the Empire Manufacturing Index, CPI, industrial production, housing starts, initial claims and the Philly Fed will be released. Inflation has been contained and CPI and PPI are unlikely to move the market. Retail sales have been relatively weak but the RTH is making new relative highs as we head into the busiest season of the year. Investors are expecting retail stocks to improve this fall and I doubt that a weak number will derail that trend. Housing starts improved last month and that could provide a spark.

The market is near its highs of the year and option expiration could have a positive influence.

As long as the market stays above SPY 96, I will maintain my bullish bias. I will sell out of the money put spreads on strong stocks when the market pulls back and finds support. This strategy has been working well and I will continue to use it. The dip last week was very brief and it did not even test support at SPY 98 before it rebounded. That tells me that the bid to the market is still strong.

I believe the market will try to establish a new relative high next week. If that unfolds, there will be another round of short covering and option expiration buy programs will kick in. Stay bullish and keep your distance by selling out of the money puts. 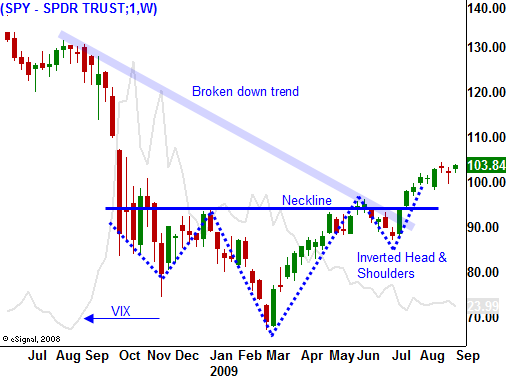