Another Higher Low Has Been Established. Look For A New High Next Week!

As I’ve been mentioning, the market has all it needs to move higher. However, the easy money has been made and you need to “buy the dips and sell the rips”.

Choppy trading has settled in while the market searches for new information. The economic releases have not been robust, but they are “less bad”. Last week, the Unemployment Report came in worse than expected. That actually could be bullish for the market because it means that the Fed will maintain its accommodative policy.

Low interest rates benefit consumers, businesses and lenders. In two weeks the financial sector will dominate the earnings scene and I expect excellent results. Yesterday, Goldman Sachs raised their earnings expectations for major banks, citing the same key factors as I have been mentioning for the last week. Strong profits from this sector will fuel the market and eventually, lending practices will loosen up.

The recession is more than a year old and comparatives will be easy to beat. It is possible that we will see both top-line and bottom-line growth. Corporations have dramatically cut expenses and any revenue growth will go right to the bottom line.

In today’s chart, you can see how the last three declines have been very brief and shallow. Each has established a higher low and each time, the market has rallied to a new relative high. I believe the same will be true this time around. If the market starts to grind higher on earnings releases, option expiration will “goose” it to new relative highs next week.

Asset Managers are still under allocated and they need to buy stocks or risk underperforming their benchmarks. We have escaped the weakest part of the year (September) and stocks are poised to rally.

The earnings are fairly light this week. Initial jobless claims are volatile week-to-week and most analysts watch the four-week moving average. This Thursday’s number is likely to show some improvement since last week’s release missed expectations by a fairly large margin. As long as the four-week moving average continues to move lower, the reaction should be neutral to positive. Same-store sales for the month of September will be released on Thursday by major retailers. The consensus is for a small decline. This means there is a small chance for an upside surprise.

The market has a strong head of steam today and it has rallied back above resistance at SPY 105. As I mentioned yesterday, I have been selling out of the money put spreads and they are working out extremely well. I’m still somewhat cautious and I only have 50% of my desired risk exposure. If the market continues to hold above 105, I will add throughout the week.

Earnings and interest rates drive the market and I believe we have both in place for a year-end rally. Buy the dips, set targets and sell into strength. 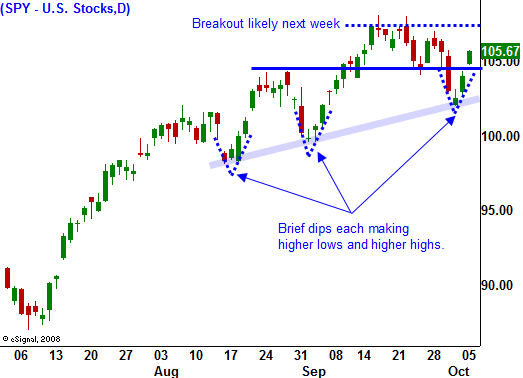