Look For Support This Week and An Earnings Rally Next Week!

Last Thursday, the market fell dramatically after initial jobless claims came in higher than expected and Goldman Sachs lowered its estimates for the Unemployment Report. Nervousness spread throughout the market and traders took profits.

Jobs were weaker than expected and payrolls fell by 263,000 in September. Analysts had been looking for a decline of 200,000. After an initial decline, the market was able to recoup most of its losses.

Last week, economic data was not all that bad. Employers plan to cut 13% fewer jobs than they did in August. Continuing unemployment claims fell by 70,000 and the four-week moving average fell by 6000. Consumer spending was up 1.3%, the largest gain since 2001. Construction spending was up 1.8% and pending home sales were up 6.4%. ISM manufacturing came in at 52.6 indicating economic expansion.

This morning, ISM services rose to 50.9. The service sector accounts for more than 80% of our economic activity and a number above 50 represents expansion. Goldman Sachs raised earnings expectations for major banks. I agree with their forecast and I believe that will bode well when banks release earnings during the next two weeks.

Wednesday, Alcoa will kick off the season. The first two weeks are dominated by financial institutions. Interest rates have been low and the spread between borrowing and lending rates has never been wider. Banks have attracted new capital and their leverage ratios have been reduced to a point where they can sit on toxic assets. That means the write-downs would be much smaller. The recession is more than a year old and the comps will be easy to beat.

The Unemployment Report was weak, but not dire. This might actually work to the market’s advantage. The Fed won’t be able to increase interest rates until the job market improves. Consumers and businesses will benefit from low interest rates. As long as the employment numbers don’t deteriorate for a second month in a row, a year-end rally is still in the cards.

The most critical market level to watch is SPY 100. As long as that level holds, we could challenge the highest from a month ago. If that level fails, the market will roll over and major resistance will form.

I am selling out of the money put spreads this week. I have seen decent support the last two days and I will reach 60% of my desired risk exposure this week. 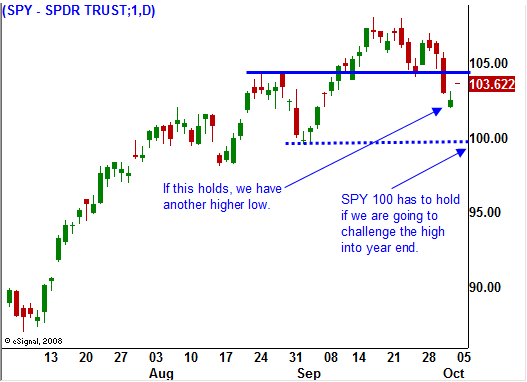