Is This The Reversal? Take A Small Put Position – Add On Weakness After The Number!

A week ago, the market sold off heavily in light volume the day after Thanksgiving. Dubai World defaulted on bond payments and we were reminded that financial problems still exist. Dubai’s problems were widely known and the event was priced into the market. Traders returned to work this week and rallied the market to a new 2009 high.

The move higher was driven by end-of-month/beginning-of-the-month fund buying and by seasonality. From a news standpoint, the releases have not been that positive. The Bank of Japan will start quantitative easing to fend off deflation. This morning, we learned that Q3 capital spending fell by almost 25%. I don’t understand why their market is up 8% on the news this week. A purchasing manager’s survey conducted by HSBC painted a rosy picture in China, but it contradicted a flat PMI released by the Chinese government a few weeks ago. Asian markets have been strong and to a degree they have pushed our market higher.

Last week, durable goods orders and GDP came in worse than expected. ISM manufacturing and the ADP employment index came in worse than expected this week. This morning, initial jobless claims were slightly better than expected, but retail sales were horrible. Consumers are not spending money. Sales comps were very easy to beat, yet 70% of the retailers had decreasing sales. “Black Friday” saw increased traffic, but lower sales per customer.

ISM services came in much worse than expected and it fell below 50 (economic expansion). Analysts expected 51.5 and the number came in at 48.7. This is important because 80% of our economy is based on activity in the service sector.

All eyes will be on the Unemployment Report tomorrow. Initial jobless claims have been improving the last four weeks and we are likely to get a decent number. I have heard some analysts call for zero job losses in November. The expectations are high and consensus estimates are for a decline of 125,000 jobs. If we get close to expectations, the market will rally and we will see a new high for 2009. However, I believe that rally will be relatively short-lived and the backside could get ugly.

Asset Managers are no longer worried that they will miss the year-end rally. The momentum has stalled and they do not want to chase stocks at this level. Bears have been humbled in the last eight months and we will not see much short covering at these levels (they are already out). In the last month, we have seen profit-taking at SPY 111.50 and traders are anxious to sell into strength. All of these factors will keep a lid on the market.

Much of this rally has been induced by a falling dollar. Tensions in Iran, troop deployments in Afghanistan and renewed financial concerns (Dubai, Eastern Europe) should strengthen the dollar. Massive short dollar positions signal an overcrowded trade and we could see a sharp rally in the greenback. This would not be good for the market.

Additionally, a stronger employment picture will raise concerns that an interest rate hike is close at hand.

With the kitchen sink being thrown at our financial crisis, conditions had better improve or we will be in deep trouble when we have to start paying for it next year. Taxes will rise on a federal, state and municipal level. That will stifle consumption and the recovery will be slow. Our government does not know how to cut expenses and our deficits are escalating out of control.

China’s recovery (if you believe their statistics) is strong, but they are an export driven economy. In the absence of a US recovery, I believe they are overproducing and they will be stuck with large inventories.

I have little faith in a rally that is led by gold and drug stocks. Both are considered safe places to park money. Furthermore, if we had a bona fide global recovery, the demand for oil would spike – it has not. Oil is the fabric to every economy and we have not seen that. A plummeting US dollar has greatly exaggerated the perceived increase in oil prices. This one piece of information contradicts everything I’m hearing about global recovery. It cannot be manipulated, but government statistics can be.

I will wait for an intraday reversal off of a new high and then I will buy puts for a short-term trade (we may see that today). It’s possible that prices will break out on a good number tomorrow and that reversal will happen in the next week or two. Regardless, I feel that this rally is in the ninth inning and the headwinds are blowing. I have started selling out of the money call credit spreads on weak stocks. I don’t want to get too aggressive shorting the market into year end.

Once the uptrend line from March fails (SPY 107) I can get more aggressive with my shorts. DON’T BUY INTO THE RALLY, LOOK FOR SHORTING OPPORTUNITIES ON THE BACKSIDE. 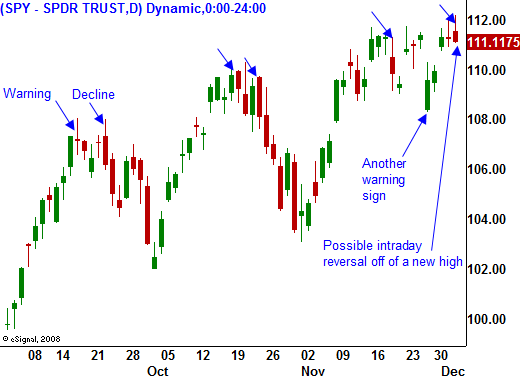