Resistance Is Strong – Get Short and Use SPY 113 As A Stop On A Closing Basis!

This morning, the Unemployment Report was released and it showed that only 11,000 jobs were lost in November (-125,000 expected). Furthermore, the losses for September and October were reduced by 159,000. The unemployment rate dropped to 10% from 10.2% last month. The expectations were very high and many analysts were revising their numbers upward before the release.

As expected, the market surged this morning. However, it has not been able to convincingly breakthrough resistance. In the last 15 minutes of trading yesterday we saw heavy selling ahead of the number. You’ll see that reflected in the third chart at the bottom of today’s report. By comparison, the volume was much heavier yesterday that was this morning and it tells me that traders are anxious to lock in profits. No one feels like they are going to miss the next big rally at this stage of the game.

On a longer-term basis, you can see how the rally is starting to lose its momentum. We have filled in the gap from last October and this is a major horizontal resistance level. After a 70% rally from the low, many investors are relieved to see their portfolios recover. They do not want to relive the last year and they are taking money off the table. In the second chart, you can see random price movement and a number of reversals each time the market tried to break out. These are warning signs that resistance is building. Before the market can move higher, this selling needs to be absorbed.

Higher employment is good, but it means that interest rates will rise. That will have a detrimental effect on the government’s cost of capital as it auctions Treasuries to pay for all of the bailouts and stimulus programs. The vast majority of bonds that have been issued are short term. That means we have to continually refinance our debt and we have interest rate risk exposure. Even a small increase in interest rates could spike the interest expense on our national debt by $300 billion per year.

This morning, Bank of America was able to raise $19 billion. It will use the proceeds to pay back TARP. Nancy Pelosi is lobbying to use TARP proceeds and unused TARP funding for additional stimulus. Politicians on both sides of the aisle are concerned with our nation’s debt level and I don’t believe it will be passed. There aren’t any bullets left in the gun and now we will see if the economy can recover on its own.

Higher taxes are just around the corner (federal, state and municipal). Estate tax increases, an Afghanistan surge tax, and a stock transaction tax have recently been tabled. This is in addition to higher personal income taxes, higher corporate taxes and capital gains taxes. We will pay for all of the horrible decisions and the excessive government spending for generations.

Stocks are priced for a recovery. Many cyclical stocks have reported poor earnings and the guidance has been weak. However, they have rallied. Our problems run deep and I believe the road to recovery will be slow. When the first signs of trouble appear, we will see a pullback.

The market might have another 2 to 3% of upside from here. However, it has a downside of 20 to 25%. Given that risk profile, it doesn’t make sense to stay in stocks. If investors feel the same way I do, we could see a fairly sharp decline.

After the release, the market has backed off from its highs. Resistance is firmly in place and profit-taking has set in. I have been selling out of the money call spreads and now I am buying puts. I will use SPY 113 as a stop on a closing basis. This is a relatively short-term trade and I don’t want to fight year-end seasonal strength. A longer-term shorting opportunity will present itself when the uptrend from March fails (SPY 107).
. 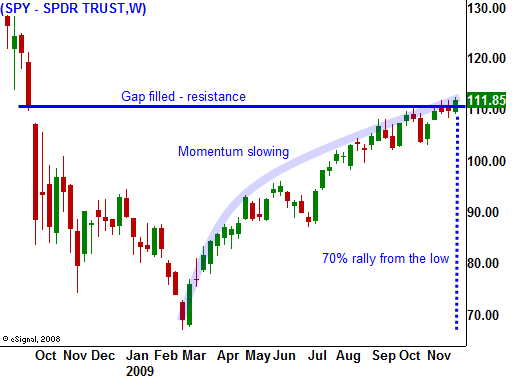 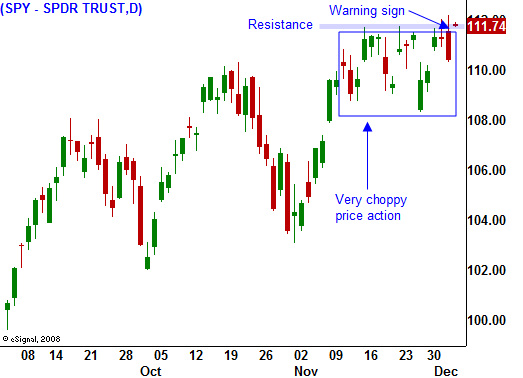 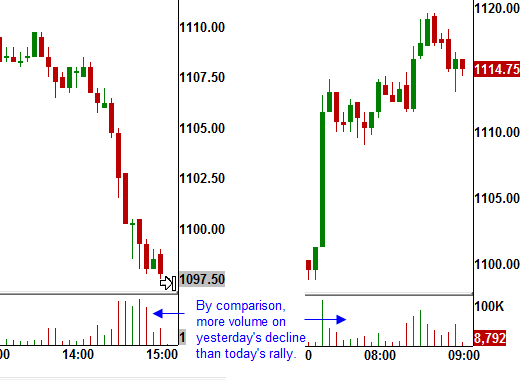